Discussing various ways of bidding in the Handshake auctions

While the “new releases” of Handshake domains will end in Mid Feb 2021 - even afterwards there will be auctions for names that have not yet been opened. So auctions will be around for the time to come.

Even we have names on our list that we haven’t opened yet - just because - it is overwhelming and there is so much out there. So we want to give some insights and tips we have learned and experienced - from the community and in the “pits” of this insane auction process.

How Does the Handshake Domain Auction Process Work?

First, the auction process is not the typical one where the highest bidder wins and pays that price.

It is a Vickrey auction process - where the winning bidder pays the second highest bid.

That means - if you bid 100 and you’re the highest bidder - you don’t actually pay 100 - you need to look at the next highest bid, which oftentimes is much less - and that is what you pay.

The difference of your highest bid to the second highest bid is returned to you in your HNS wallet to use for future auctions or DNS updates, etc.

Let’s Go Through the Process

So the funny one to use an an example is theirname/ - Johnny Wu at Namebase started a “Their name” campaign for people to buy their friend’s domain names on Handshake to gift to them during the Christmas holiday period.

Someone immediately saw “theirname/“ and opened the auction.

Discussing in the Discord Namer Community by Namebase, Johnny and others said - let’s all bid 1 on it and then he will randomly select the winner (assuming he won - which he did).

The hilarious part - is of course there were bidders who did not see the Discord channel and know there was this game - and they were bidding above the 1.

So was this a full bid, or was there a mask. 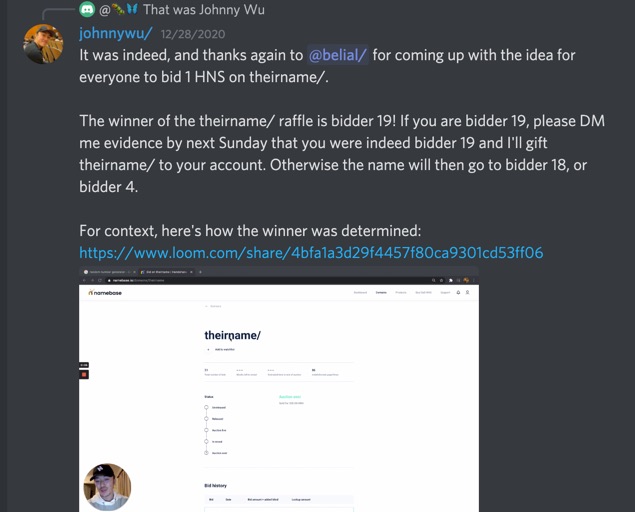 Wait - we didn’t talk about “masked” bids yet (in some wallets it is called a “disguise”).

The “true” bid will not be exposed to everyone until after the reveal period.

Ok, so let’s go back to the “theirname” example.

But we aren’t sure he would win, why?

If he had done that - he would have lost. 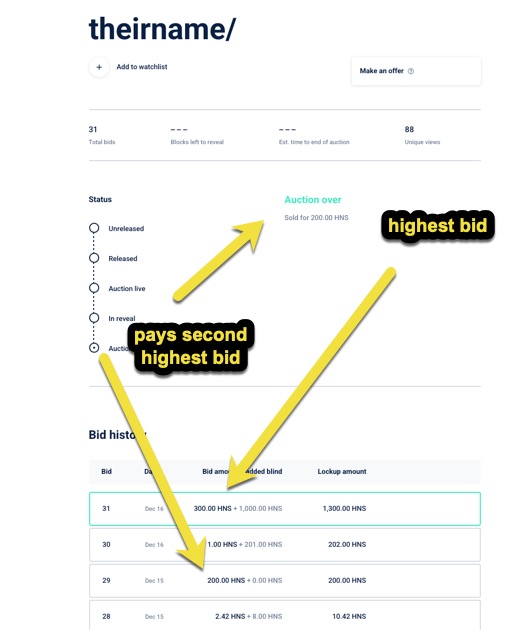 So let’s now move to the reveal period - which is over - so the public can see this from the Handshake blockchain transactions.

And those are the biggest bids, the 1s and 2s we can ignore as no matter what (how much bid or blind) they would not add up to higher than the top ones there.

But the extra 100 (from the 300) would not be returned to him until after the Reveal period.

How long is the reveal period?
10 days, technically 1440 blocks long.

After the reveal period - everyone’s bids are returned, and the winning bidder gets the Handshake domain and the difference between their highest bid and the second highest bid.

So in theirname/ example, Johnny got the domain “theirname/“ added to his Namebase account, and a 100HNS credit (the 300 - 200 difference in bids).

Being a good sport, he then picked from the 1 bids and selected

As the winner and they claimed their name.

What if There is a Tie?

If everyone bid exactly 1, like the game was supposed to be?

Then the blockchain would randomly select. We’re not so sure how the choose, but are told it is totally random.

Just don’t try to do an exact same bid! It has also caused delays during the reveal when we have noticed tied bids.

You’ll often notice 10.001 bid, that .001 HNS difference would be the difference in winning the auction.

Some Experience and Strategies

So what is the strategy?

As we see more “newbies” coming in, just really trying to win their own name - it has been frustrating to us to see them lose to snipers in the last few blocks.

So these are some tips.

While some do open the auction at the max bid they want to pay - this is risky. As it gives time for others in the market to consider bidding above it. We like to open as low as possible - which is 0.4 in Namebase, and then put our “Real” bid at block 20.

This way - you are maximizing both the uncertainty to other bidders on how much you will really bid, while almost “guaranteeing” (tough to promise, even at block 20) that you will put in your full bid and it will be mined by putting it in at block 20.

By not being cheap, realize, you will be refunded the difference of your highest bid and the second highest bid. If it is your personal name, snipers probably won’t really bid too high as it is too risky for them to bet you will pay more than your bid in the marketplace.

Other things we have noticed - there are more and more bots coming into the auctions. And we can see trends.

Some bots are programmed to bid 50 or 51 on so many auctions. And when the reveal comes, it is almost always a bid less than 10. Again, this bot can be re-programmed by its owner to do different bids and masks, but this is what we have seen for a couple weeks in the end of December 2020.

We hope this guide has been helpful for you to understand the auction process, as well as get some insights and strategies on how to win ones that mean something to you.

But those who really care about the name - put your bid in earlier, and put in the true price you want to pay. Just because you don’t see others bidding a lot - don’t risk not putting your real max bid - as many have woken up in the morning to see people bidding last minute and winning.