Bitmain miners launched for Handshake (With AntPool adding to the pool)

Exciting news for the end of 2023 - Bitmain, a top bitcoin mining manufacturer, has launched a HNS miner!

My favorite part - they found HNS on their own will and research. No centralized team or DAO or foundation had to do “business development” to reach out to them, “bribe them”, etc. The Bitmain research team was looking for a POW (proof of work) domain naming protocol - and found Handshake.

As I explained on a recent Handshake.mastermind, they they tried to find a contact in Handshake but were so confused as there is no centralized foundation or team to talk to. Rithvik recommended they talk to me / Skyinclude as we do twitter spaces and marketing content and they sent me a Telegram.

Honestly, at first I thought it was a scam, but we had a group Zoom call and they really were Bitmain. 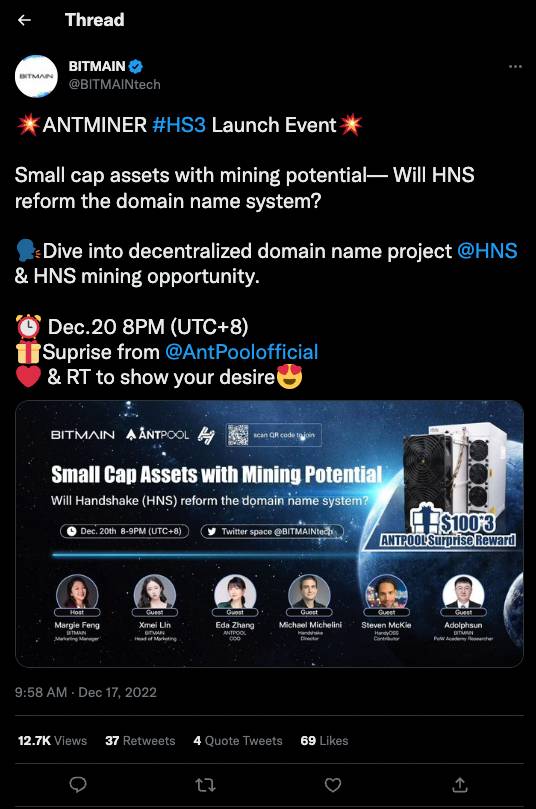 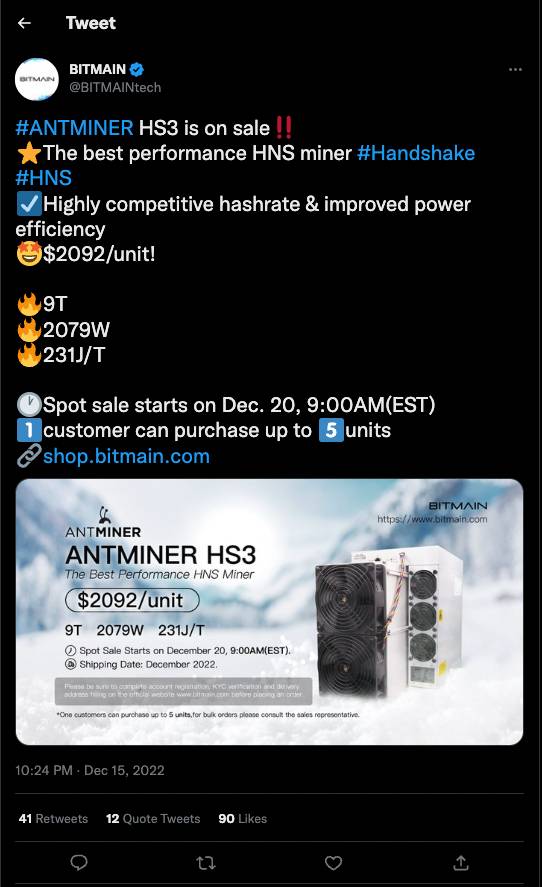 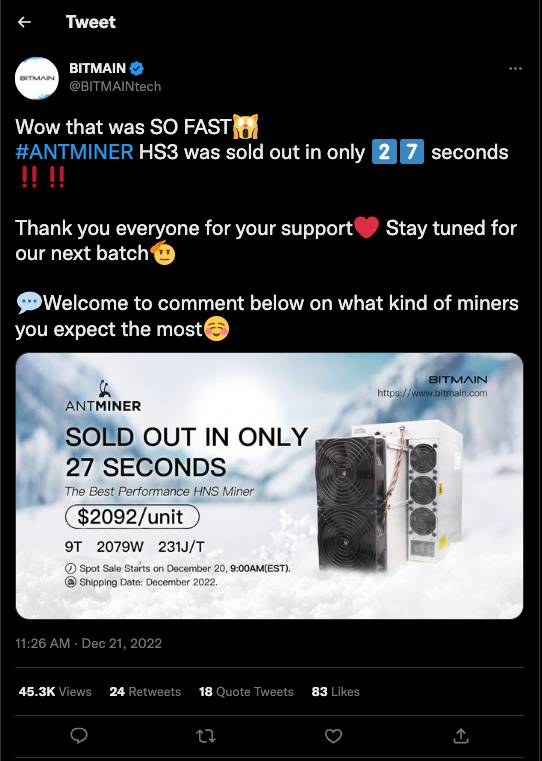 On top of Bitmain making a mining machine for Handshake, Ant pool also joined - offering 0% fees for the launch
https://twitter.com/AntPoolofficial/status/1605399272626610176/photo/1

We have officially launched HNS!🎉🥳 For a limited period of time only, mine HNS at 0️⃣ fee on ANTPOOL. Check out our HNS mining tutorial here: https://support.antpool.com/hc/en-us/articles/5984223896345-HNS-Mining-Instruction 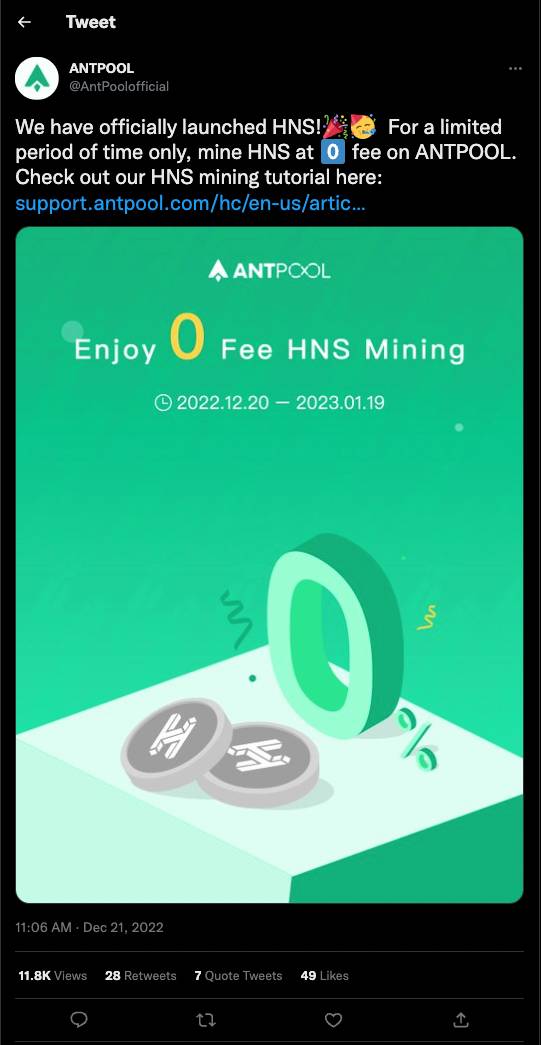 This truly makes me even more excited about Handshake being the correct way to do domain names in web 3. No permission needed, companies as large as Bitmain can find it on their own will and research, build a miner, and release it.

And the results are already speaking for themselves, as ape.c shows the new Ant Pool already getting a significant share of the mining pool
https://twitter.com/apedotc/status/1605907251088211969

For the first time in a long while, f2pool's hashrate share has dropped below 50% for blocks mined in the last 24 hours. ViaBTC has increased the hashrate and a new pool shown as unknown (probably Antpool) is at a hashrate share of 24% in the past 24 hours. 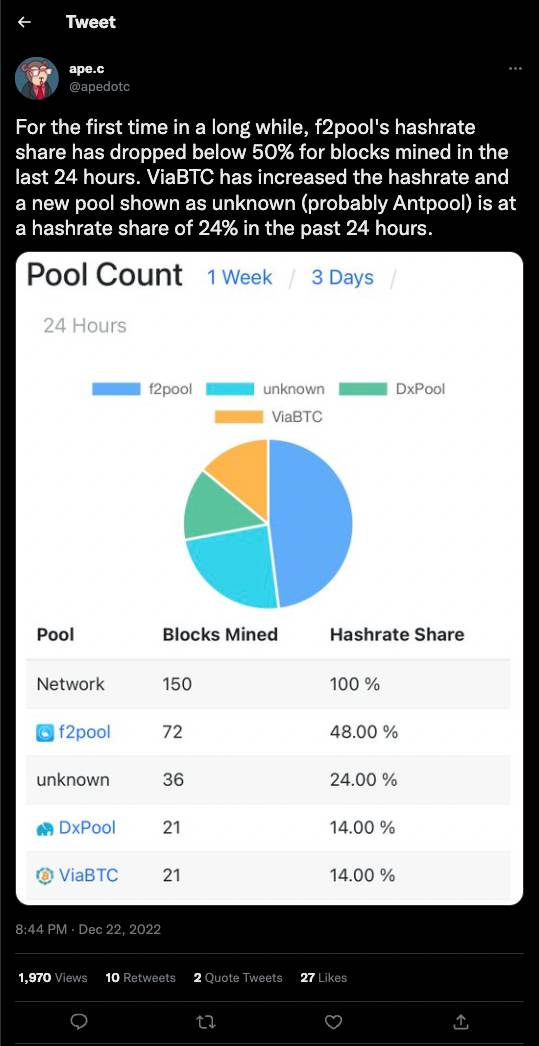 Yet other “alternate naming solutions” feel this is a flaw of Handshake and instead need DAOs and teams and foundations - yet to me that just seems like re-creating ICANN.

Future looks bright to me, we must keep up the belief and the hope that HNS is the true and decentralizing naming solution. Law of attraction.