Being a Customer of Blockchains vs Being a Blockchain Protocol (i.e. Namebase is Not Handshake)

Congratulations - you are a customer of a blockchain.

Maybe you’re a customer of Ethereum - which is used for a ton of smart contracts such as NFT and defi.

Maybe you’re a customer of Handshake /HNS - which is providing minting (yes “MINTING”) of TLDs through a vickrey auction process. Or using HNS for updating Name servers and other info on your TLD (not SLD) domain.

Maybe you’re a customer of Bitcoin’s blockchain for sending money.

Who Are Customers of Blockchains?

What is a user?
Coinbase is a user of blockchains. It allows people to buy crypto using their centralized exchange.

Opensea is a user - allowing its users to buy and sell NFTs on various blockchains.

Unstoppable Domains is a user, allowing customers to mint their centralized words they call NFT domains onto Ethereum or Polygon.

Namebase is a user of the Handshake blockchain - allowing its KYC and non-KYC (restricted usage) to buy and sell HNS, as well as to open and bid on HNS auctions as well as sell HNS TLDs on their secondary market. 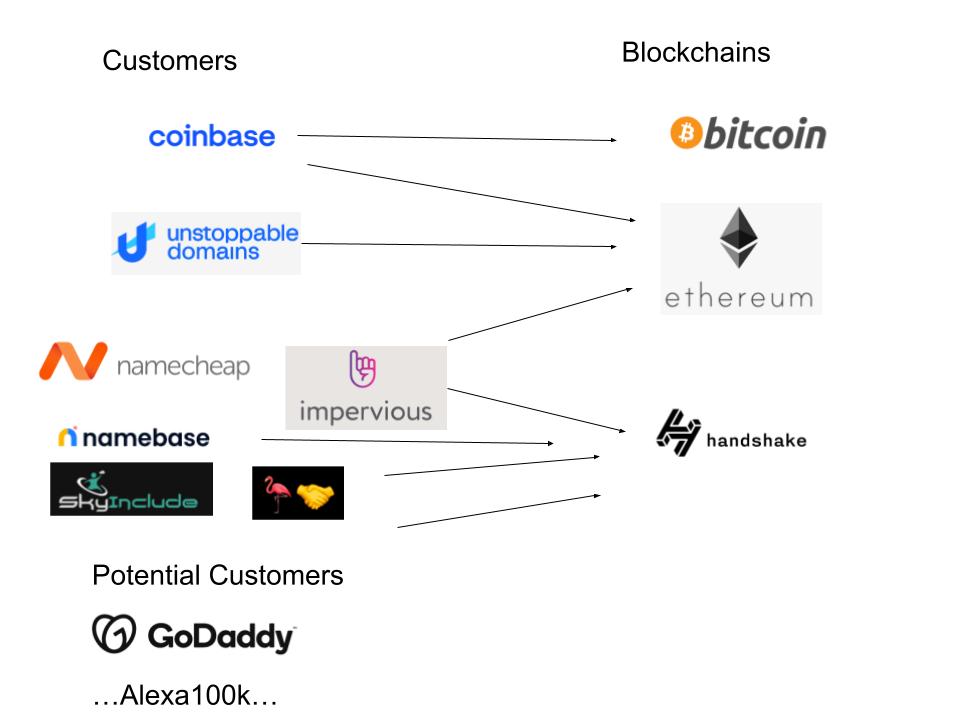 End Users Also Can Interact Directly With the Blockchain Protocols

But - here is the beauty of blockchain

Anyone - permissionless - can engage on the blockchain following that blockchains - here it comes - PROTOCOL. Aka rules of engagement.

So I do not need to use these “B2B users of these blockchains:
I don’t need to use:
Coinbase - I can interact directly with Bitcoin. Coinbase just makes it easier.
Opensea - I can just interact with Ethereum directly, using MetaMask wallet, or Etherscan.io
Unstoppable Domains - this doesn’t work the same - because I am reliant on their company to keep my integrations online. They could turn off a specific domain or an entire TLD (like .coin). But yes, once I mint their words as NFT domains on ethereum or polygon, sure I own those words there.
Namebase - I don’t need to use them to interact with HNS blockchain. Here at SkyInclude we have made so many videos on Bob Wallet, to encourage decentralization. I love Nambase and how it helped onboard us here at SkyInclude and many others, but the fact is- we do not need to use it.

To Be Clear - Namebase is Not All of Handshake

There is a lot of confusion about who owns Handshake, and is Handshake Namebase. For example in this recent Telegram chat on the main HNS group: 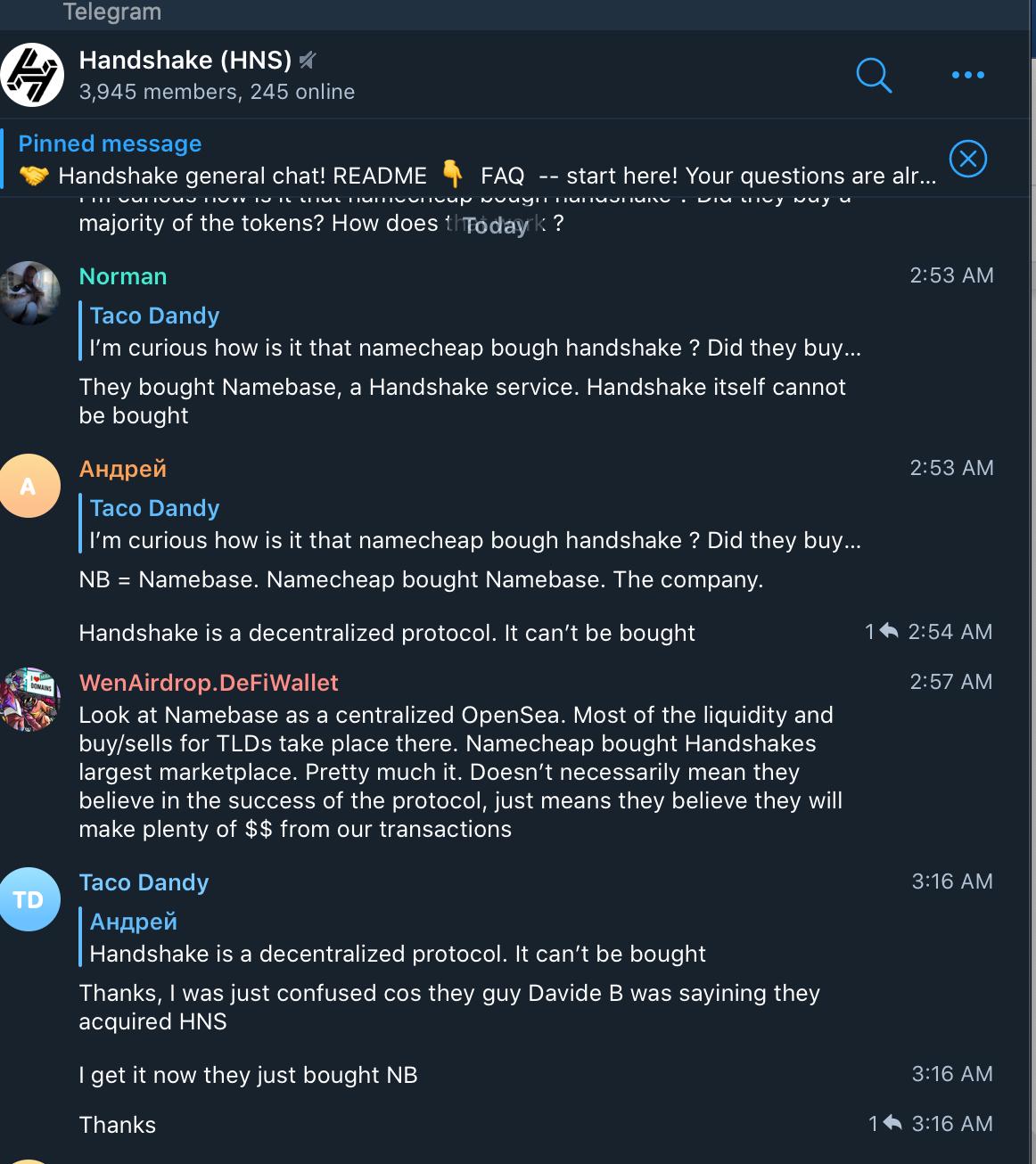 To make this a dedicated section here - you can use Handshake without ever using Namebase.

It is totally independent.

Flamingo Handshake uses some Namebase, some Bob Wallet, for settlement.
It is a tool you can use. Many use it to buy and sell premium names at our live auction, online.

Shakedex is a protocol and a way to do decentralized auctions on secondary.

The Legal Case of Unstoppable Suing Gateway, and Namecheap Stepping in to Help

Now, on Twitter, some do not like that Namecheap has been backing some people in the community - namely Scott the owner of .wallet on Handshake.

You want to know how much Unstoppable Domains tried to block them from getting involved?

You want to know this COURAGE by Scott to stand up to a BULLY who takes their VC money and overpriced domain income to SUE small registrars like Gateway and thinks they will scare them away?

Why did UD delay the refunds on .coin for so long? In my viewpoint, because thy thought they could scare away Gateway (which they did, which I am still sad about) and the just start selling .coin again afterwards.

Come on people - most use centralize services on top of blockchains - for ease of use and “fiat payment”.

But users have a CHOICE. 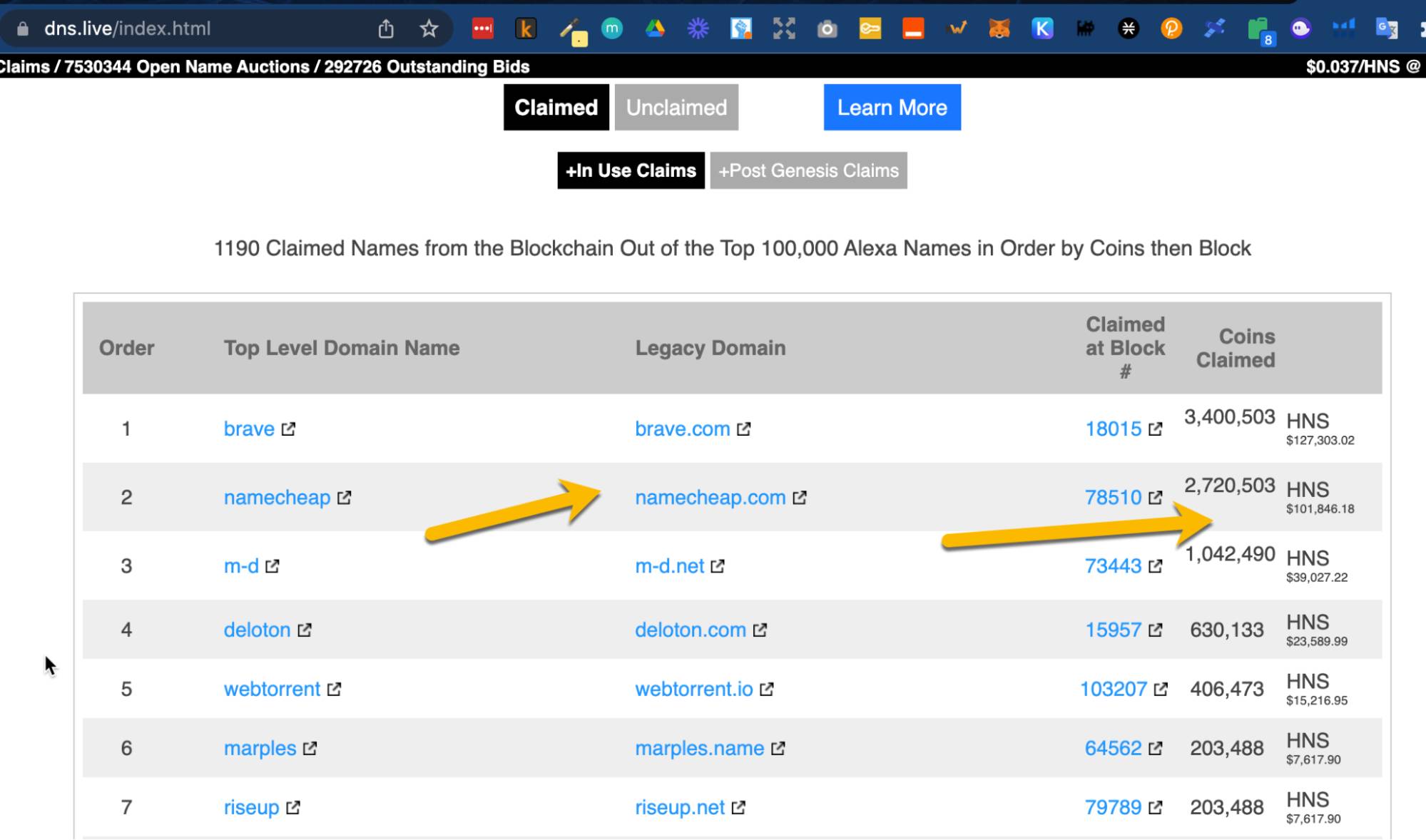 https://twitter.com/NamerTips/status/1584598519041904640
EXACTLY. The debate has become too volatile for transparency NOT to be center-stage. Namebase does custody a majority of HNS names which is CLEARLY a form of centralization. The owner of Namebase is a major centralized player; and this impacts HNS’ “truly decentralized” argument. 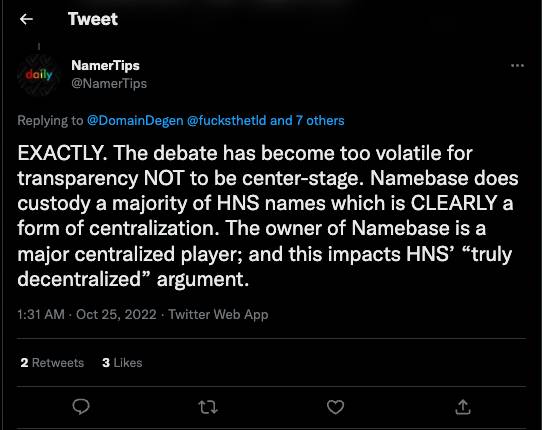 https://twitter.com/NamerTips/status/1584606963782287360
Right. So if Namebase shuttered, the HNS names in their custody wouldn’t be accessible despite being “owned”. The .coin criticism is based on the control over names; when in reality the MASS MAJORITY of HNS names are in the custody of a corporation. “Not your keys, not you name”? 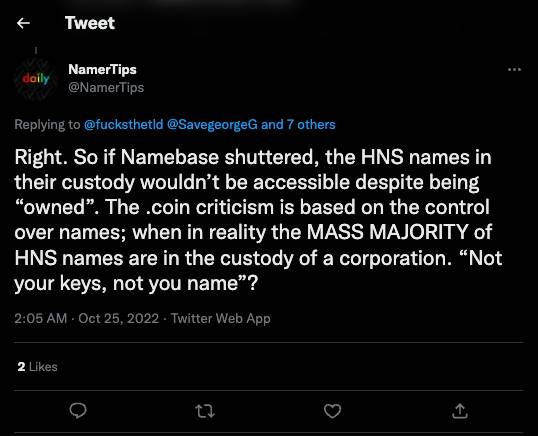 By choice of the user not design of the system. HNS isn’t NB and vice versa. HNS users can leave NB any time. UDfam is stuck in a centrally controlled series of smart contracts. They aren’t the same. If anyone uses NB that’s their opt-in. 100% of UD names are reliant on UDtheCorp 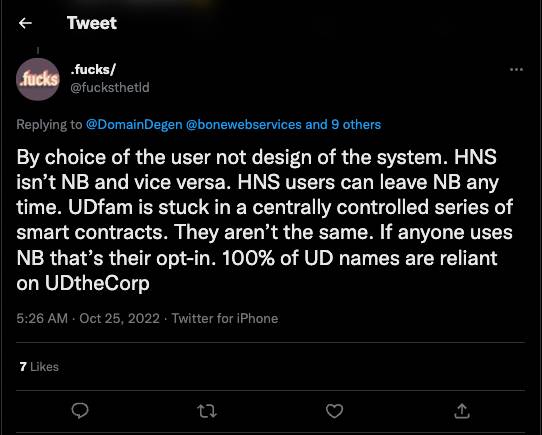 Centralized BY choice compared to Centralized by DESIGN
https://twitter.com/fucksthetld/status/1584658607978983425

Sure. Centralized by choice and centralized by design are worlds apart. Only ones means they last beyond the central point of failure, however. And that’s #handshake 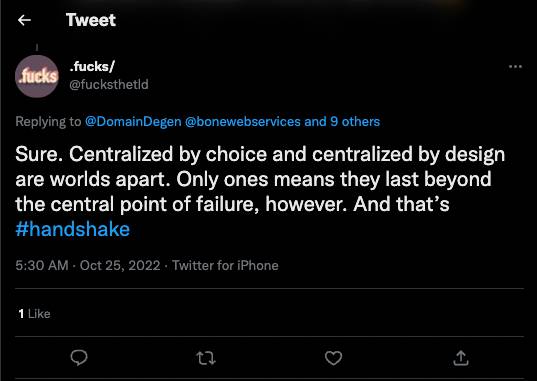 We Welcome Godaddy and Many Others too (Name Claim + otherwise)

Handhake, the reason I like it - it is complimenting the “current web” the “old web”. 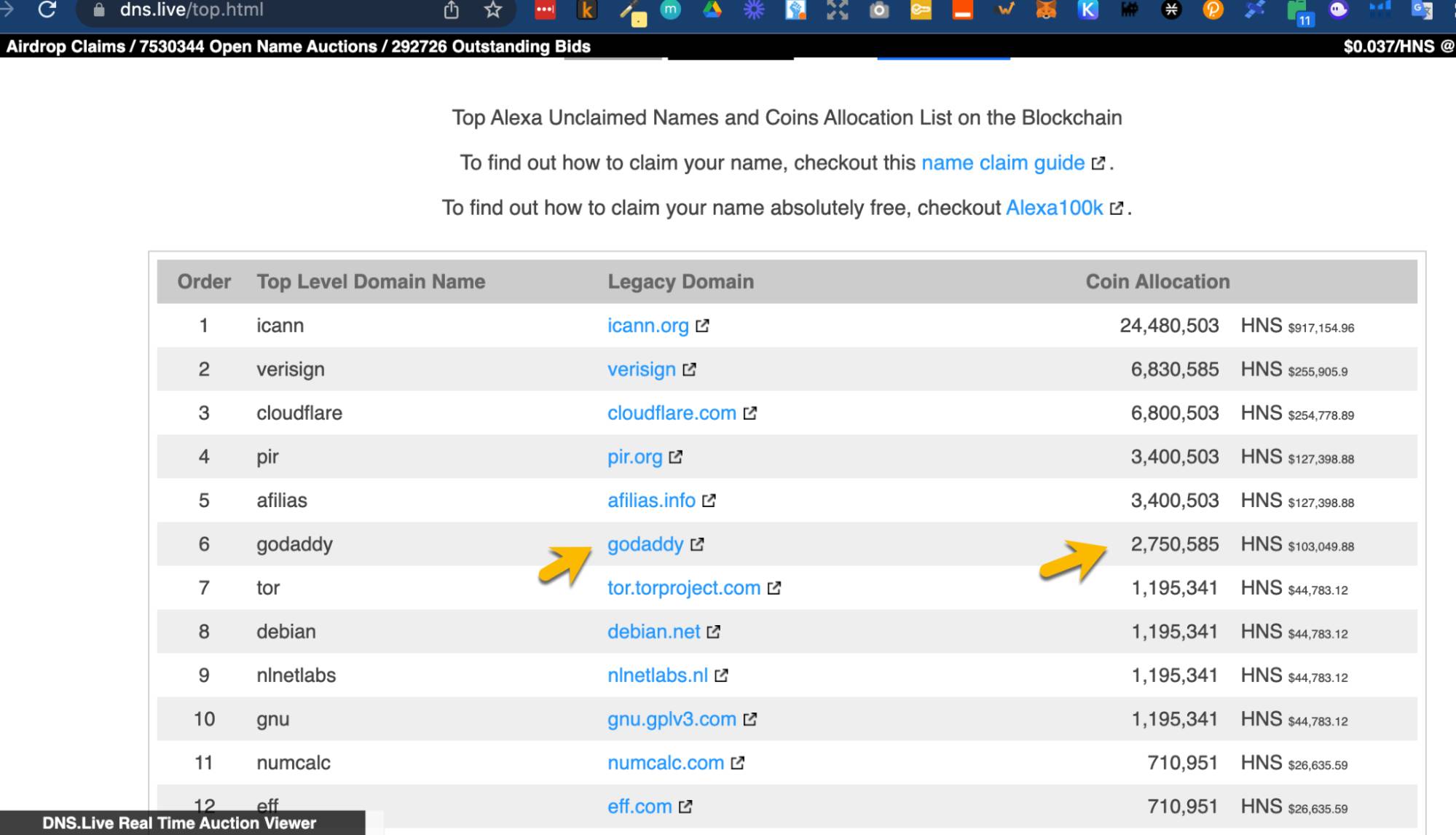 As well as many others, even ICANN.

But you are a user of a user of a blockchain. And you cannot bypass Unstoppable. They control the “on and off” switch to all the integrations they paid for with their premium domains and VC fundraising.

At least on Handshake, I can choose to move to different solutions.

Hope this help people, who keep an open mind, understand the reason why the Handshake (HNS) and ENS community is so annoyed at the claims Unstoppable makes in their marketing.