What is the Handshake Blockchain?

Want to get onto the blockchain of HNS

Before we jump right into HNS and the Handshake blockchain - first, what is blockchain? Many go crazy about the BTC / bitcoin - which is money on the blockchain. But the real technology is the blockchain itself.

It is essentially a public database.

Well, certain parts of it can be private, but the exchange of “data” from one party to another is recorded on the blockchain.

This is so that later, if things need to be verified, you can search the blockchain and verify it. It has been confirmed by a lot of different computers and they are all storing the records.

Compare this to the current / old way - of centralized. A single database that is updated by a governing body. This can be a government or a company.

What is the big deal about having centralization and a single body updating it?

Because that party can change things without needing others to acknowledge it!

It can change previous historical records due to its “TOS” (which changes often as well).

But to change something in the Blockchain, you would need to tell EVERYONE and get EVERYONE to know you are changing something. Which, basically is close to impossible as it is already recorded and distributed all over the internet on various computers.

To change things, you would make a new transaction, and show everyone this new change happened on this new date.

That is what the real exciting thing is about blockchain. It essentially takes out 1 single power from updating records and databases and opens it up to the world.

Many of us, myself included, get nervous - our public data is on the blockchain? This is where private keys come into play. To “unlock” some of the details on the blockchain, let’s say a “row” in a Excel spreadsheet (not exactly the same, but for simplicity) - you need to enter your “password” (which is essentially the private key) and then that piece / group of information on that “row” in blockchain is revealed to you.

This can be for medical records, business records, ownership records, and in the case of HNS and Handshake - domain ownership and domain settings (DNS).

So the Handshake blockchain is the “decentralized” ownership records and settings for domains. At the TLD (top level domain) level. Meaning .skyinclude is on the blockchain that the HNS address owns the name .skyinclude and the DNS settings are pointing to a HEX location and then those records are the ones who can update the settings.

Compared to the current centralized ICANN method where ownership is centralized on their database and systems.

Now, let's use one of the "block explorers" (a website that shows us the transactions on the Handshake blockchain). There are a few, in this example we will use HNScan.com 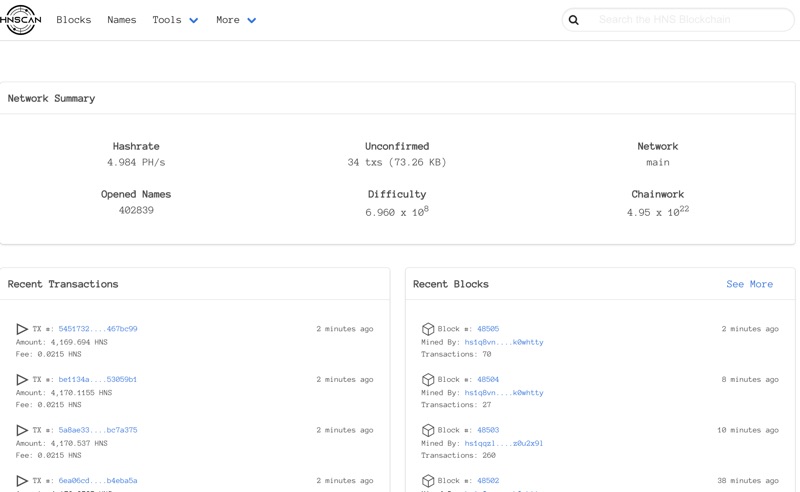 Blocks on the Chain

So these transactions are "on the blockchain" for the public to see and verify.

So that is "it" - this is decentralization at work.

These domains and transfers and domain setting (DNS) updates are recorded on the Handshake blockchain for all to see.

It cannot be manipulated and updated by 1 person or company.

And this is the foundation of everything that happens next.