Discussing the Tokenomics of the HNS (Handshake) Coin

Matt Zipkin gave some great insights on all of this

After the video was made, Matt reviewed it and gave these valuable insights

so, forks mean changing the prrtocol rules.
A HARD fork means the new rules are invalid on the current software. We call this "not backwards compatible" and it means that everyone who wants the fork MUST upgrade their software. If some miners continue to run OLD software, you get a chain split. Quintessential example of this is Bitcoin Cash. New software was released that changed some rules in such a HARD way that existing bitcoin software just ignored it. Meanwhile that new software went on to mine blocks and create a second chain. projects like Monero, Etehreum, ZCash and others do hard forks intentionally and even regularly -- every time they do this they need to be really sure that ALL the miners will run the new software and there is no "old" chain.
A SOFT fork is equivelent to a 51% attack by miners. The miners effectively censor transactions and blocks that don't satisfy the new rules. Older software may be confused but still accept all the new blocks by these upgraded miners, because the new rules DO NOT BREAK the old rules. An example of this is Segregated Witness. New software was installed by miners and they started enforcing EXTRA rules on certain types of transactions. Software that did not upgrade accepted these blocks without even knowing that extra new rules were being applied

extending the reserved name claim period is a HARD FORK: Either everyone agrees and upgrades their software, or we risk having "Handshake Classic"

reducing the number of renewals allowed in a block is a SOFT FORK: at the very least, a majority of mining power hashrate needs to upgrade their software

We would probably use a BIP (https://github.com/bitcoin/bips/blob/master/bip-0009.mediawiki) system to determine miner status and to trigger the new rules

> we need 80 percent approval to pass? tbh I hope it doesn't pass but I like the idea of burning the Alexa coins eventually but keeping the domains reserved indefinitely, increases interoperability. Although the fact that someone can squat on a domain on namebase with no effort might be kinda bad. in other words people could accidentally be squatting.

not sure what this means really, unless he explciitly refers to 80% of hashrate (basically just F2pool and DXpool need to agree)

of course, before even releasing software like that we would need to figure out some way of determining community consensus, and there is simply NO way to really do that well.

This October 2022’s was hot and heavy and discussing about soft and/or hard forks of the Handshake blockchain. 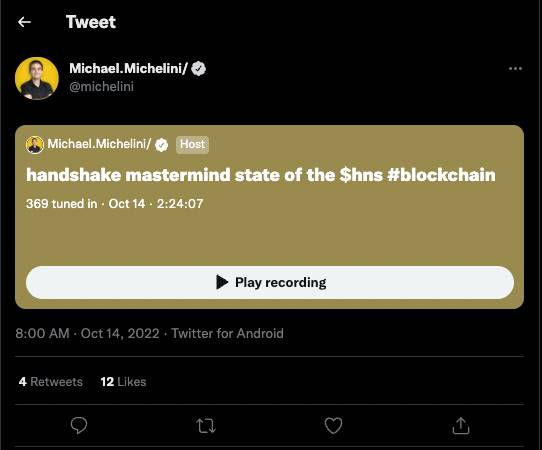 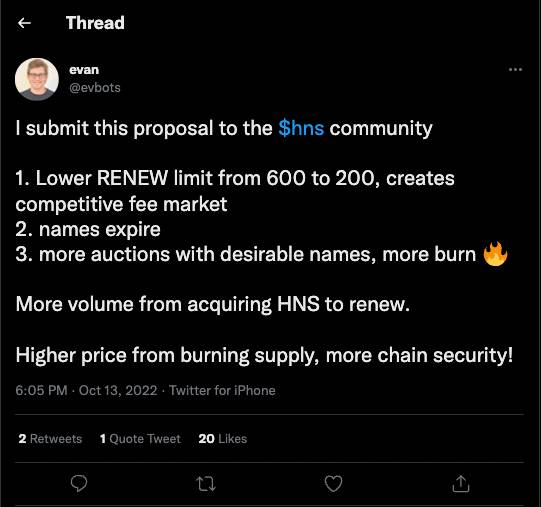 And here’s some various feedback from tweets, Youotube comments, and other places

"The whole beauty of HNS is that it's affordable for everyone to own and register. Changing fee & renewal limits will make the protocol look weak.

The only change that make senses to me is reserving the ICANN TLDs and maybe the Alexa 100k forever (but burn the HNS they can claim after the original claiming period).

Here are a few ways to pump $HNS:
1) Nambebase should work (i'm sending new users daily, and the platform is broker over a month now, i can't spend HNS if i wanted to)
2) NB should accept other (instant) payment methods (credit card, paypal, ...)
3) SLD's registration and renewal in $HNS. Browser Integrations will lead to more SLD's sales
4) Listing on exchanges will drive the price up
5) Burning from the dev airdrop and alexa100k will drive the price up

Everything should evolve in an organic way like its been doing since the start, acting like there are flaws in the design is incredibly disrespectful to the architects and will do more harm than good.

Changing fees don't like a big deal now, but went the $HNS price goes up, owning a bunch of TLD's will only be accessible for rich people or those that bought HNS coins early.

Very strange Namecoin's SLD's are getting compared with HNS TLD's. If people want to build on HNS they got an almost endless choice of SLD's for a few USD a year."