OFAC on Ethereum and Effects on web3 Domains on ETH

Don the rabbit hole we go! One of the buzzwords is “decentralized” which has various definitions depending on who you ask (and their financial investments it seems).

Today I want to discuss OFAC compliance and Ethereum.

First - who are Largest Owners of Ethereum?

We can see, on the blockchain, who the largest owners of Ethererum are, right from https://etherscan.io/accounts 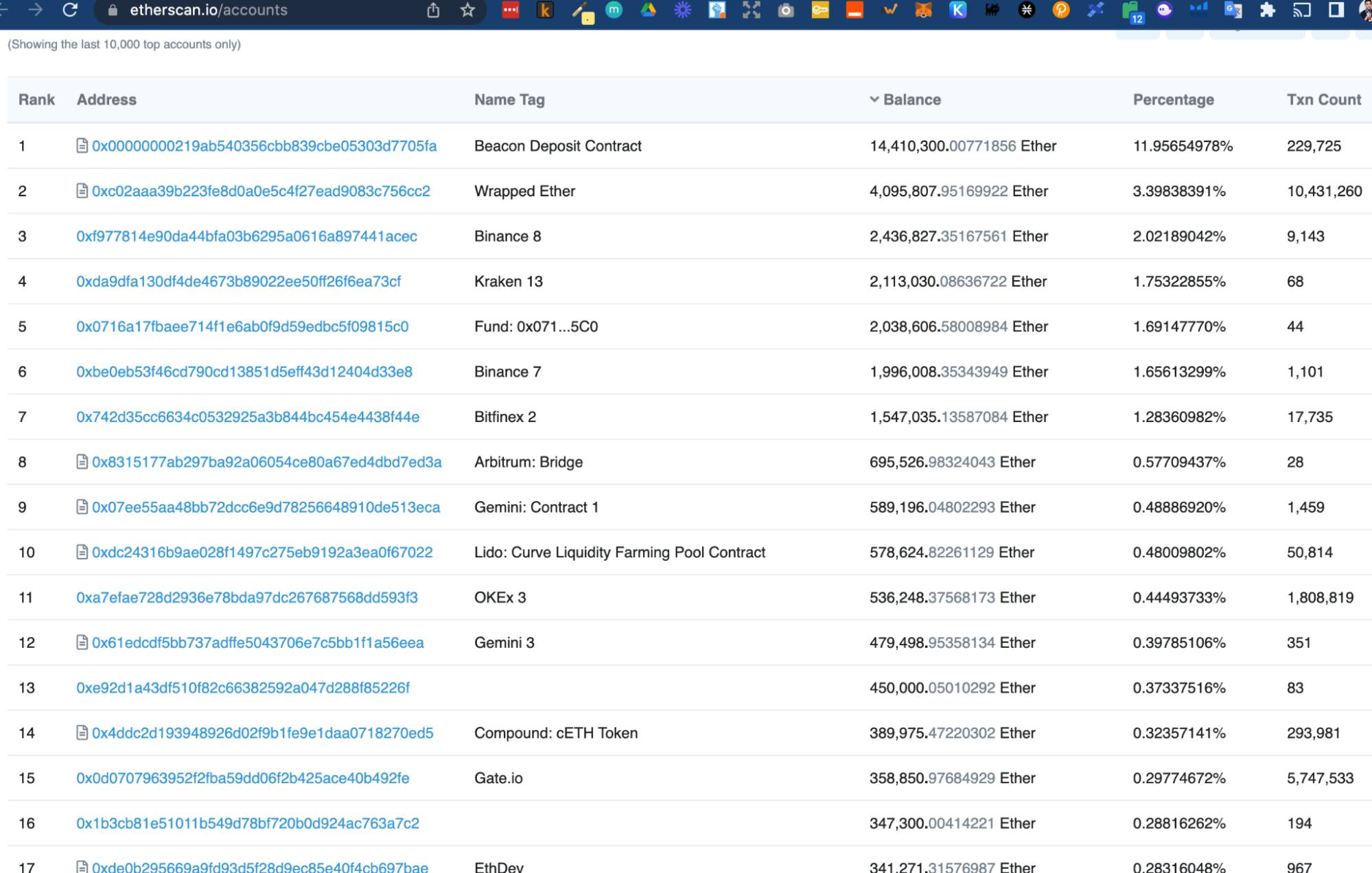 Which has name tags but may be hard to follow

Who has the most ethereum?

Who are the biggest ethereum holders? The largest ETH-holding address was an ETH2 deposit smart contract which held over 13.1 million coins or close to 11% of ETH’s circulating as of 28 July, according to Ethereum data on-chain Etherscan and Coincarp.

The second largest ETH-holding address was a Wrapped Ether smart contract with 4.28 million ETH (3.58% of circulating supply), as of 28 July, 2022.

The third and fourth highest amounts of ETH were deposited in wallet addresses identified as belonging to crypto exchanges Kraken and Binance.

Based on data from Etherscan, two unidentified wallet addresses in fifth and sixth places are top holders of ethereum outside those deposited in the smart contracts and crypto exchanges.

The two wallets mentioned above were the only two unidentified addresses among the top 10 ether holders. The remaining protocols were identified as smart contracts, cryptocurrency exchanges, and decentralised finance (DeFi) protocols.

It is unknown how much ETH holdings do early contributors and ethereum insiders currently have. In October 2018, Buterin disclosed his wallet address on Twitter. He added that he “never personally held more than ~0.9% of all ETH, and my net worth never came close to $1b.”

The account with the most Ether holding is the Ethereum 2.0 staking address, which has more than 9.4 million Ether. The second-largest account is Wrapped Ether, with more than 7.4 million tokens. Crypto exchanges Kraken and Binance are among the top 5 Ethereum holders with 2.1 million and 2 million tokens in their wallets, respectively. Many Ethereum whale accounts have no names, but the top 100 holders control about 40 percent of the crypto’s existing supply.

Food for thought:
What was the reasoning of moving to Proof of Stake? To save the environment?

Or was it about control and censorship?

These are thoughts to ponder, and many of these discussions you will not find on Twitter or youtube.

Some ask - was this done as a way for Ethereum to Overtake Bitcoin?

He is right dog, humbling and bowing to the legislators to give your corrupt and censored chain a chance to survive and keep the No1 spot.

You and ETH as a whole are now an utter disgrace to the industry. 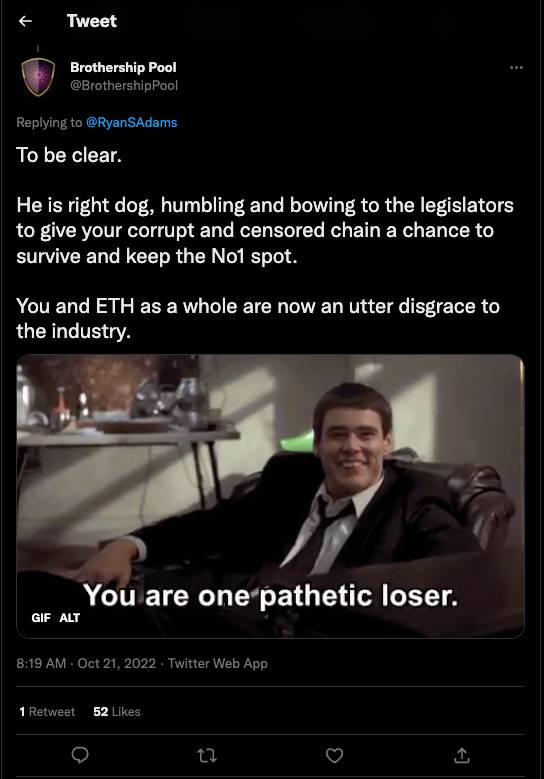 Seems that once the merge happened - in September 2022, one outcome is the ability to have OFAC compliance.

Over 51% of Ethereum validators are OFAC compliant. Ethereum is pretty much under the control of the US government…

What is OFAC? (Office of Foreign Assets Control)

The US Department of the Treasury. 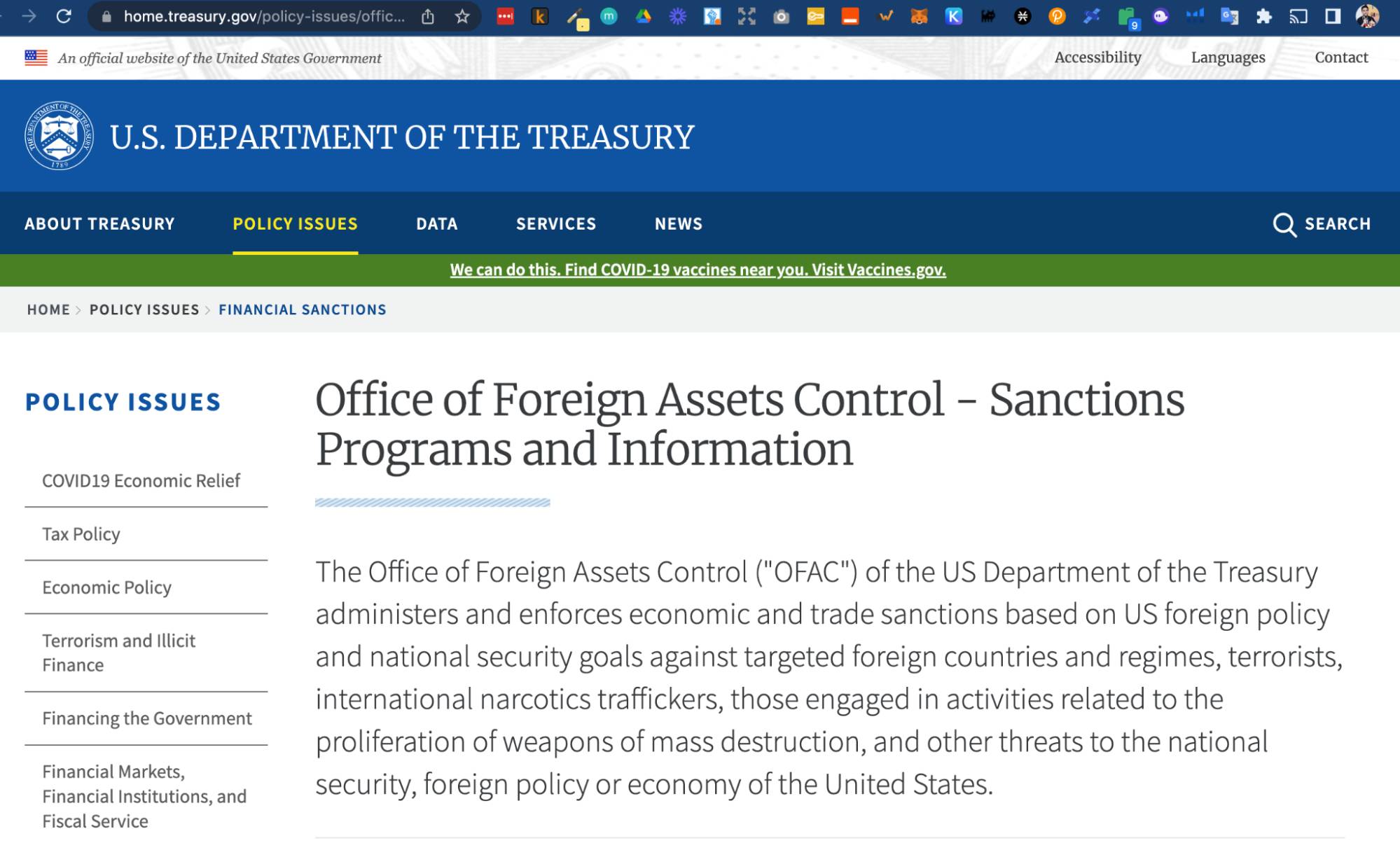 Basically - this means a US government body has the 51% power over the validation of future blocks on Ethereum.

What Does the Office of Foreign Assets Control (OFAC) Do?

The Office of Foreign Assets Control (OFAC) is the regulatory authority responsible for economic and trade sanctions designated by the United States.

The successor to the Office of Foreign Funds Control (FFC), OFAC administers and enforces sanctions based on U.S. foreign policy and national security goals by targeting certain foreign countries and regimes, terrorists, international narcotics traffickers, those engaged in activities related to the proliferation of weapons of mass destruction and other threats to national security, foreign policy or the economy by imposing controls on transactions and freezing assets under U.S. jurisdiction.

So - basically whatever this US government group says - can be censored

For a rule or a law they make up.

So - ethereum is governed by the US government now.

Will other international countries want to put their assets on this blockchain?

Sanctioned, or “non sanctioned” (for the time being.)

I’m not a terrorist (at least in my definition) - but I do not agree with this.

Could There Be OFAC compliance on Proof of Work (POW?)

So I know - you may be fully invested in .eth name and ethereum tokens and want to close your eyes and call me a tin foil hat conspiracy person. You want to say there was no other choice to get mass adoption.

You’ll say the environment, you’ll say institutional investors, the general public - this is why it had to go this way.

In Proof of Work - the current blocks can be censored by someone who has the majority of the hash rate. But anyone can step in and start mining. And you don’t need to apply to be a validator (proof of stake term), you simply put your energy (work) by mining towards the next block.

Well you can do OFAC compliant blocks in PoW, but then you need to have 51% hashrate and commit 51% attack everytime you see bad tx 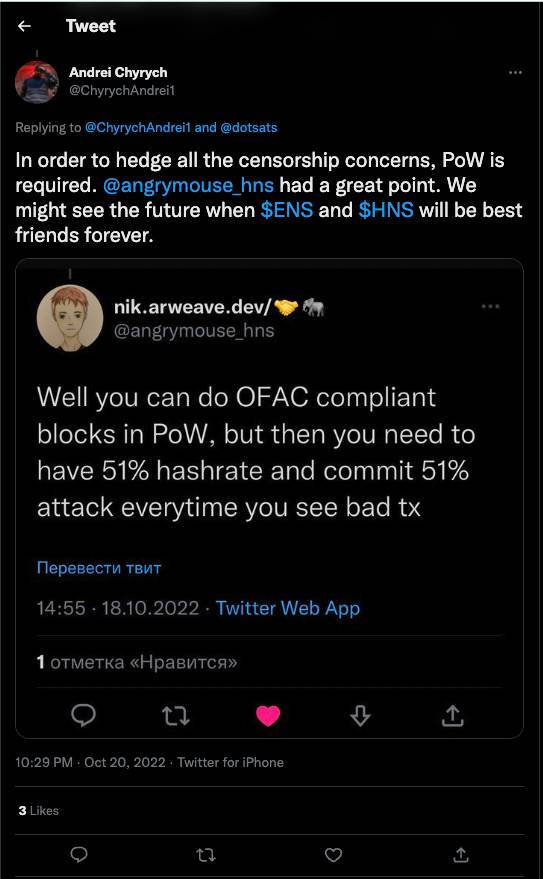 But Can’t There Be Censorship on Proof of Work (POW) too?

Yes, we have discussed this on 51% attack risks w/ Matt Zipkin at https://skyinclude.com/51attack and it is an issue.

But anyone can step in and help add their work / mining / energy to counter it. And it is open to anyone able to do it - by using money to buy machines and electricity (solar / coal / etc) to do it.

So what Does this Have to do with Web3 Domains, Handshake, ENS, etc?

What is my point?

Again - food for thought - but the Ethereum fan boys need to be aware the OFAC compliance is recent. Only during the Post Merge from POW to POS on Ethereum

What if the US government wants to stop certain transactions from happening on the Ethereum blockchain?

Could they do that - across all future transactions.

That means - any future on-chain transaction in Ethereum, can be censored by OFAC, a US government body.

How do they decide this? 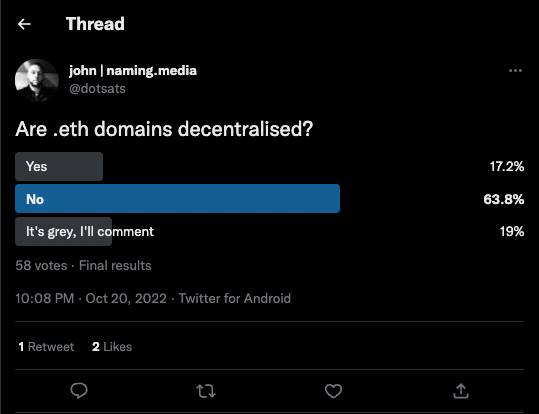 Because DAO, in this particular case voting mechanism through ownership of tokens, is the open door for centralization. The more money you have, the more power you gain by simply buying tokens. Not only that but you have to trust the token issuer, entity maintaining contracts 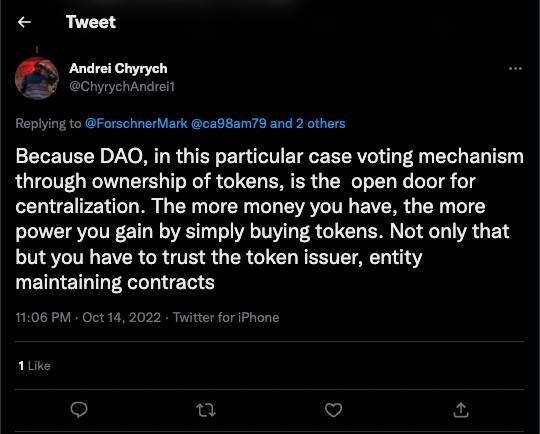 Where DAO is controlled by those with money.

Many are critical of Handshake being small, especially Brantly.eth 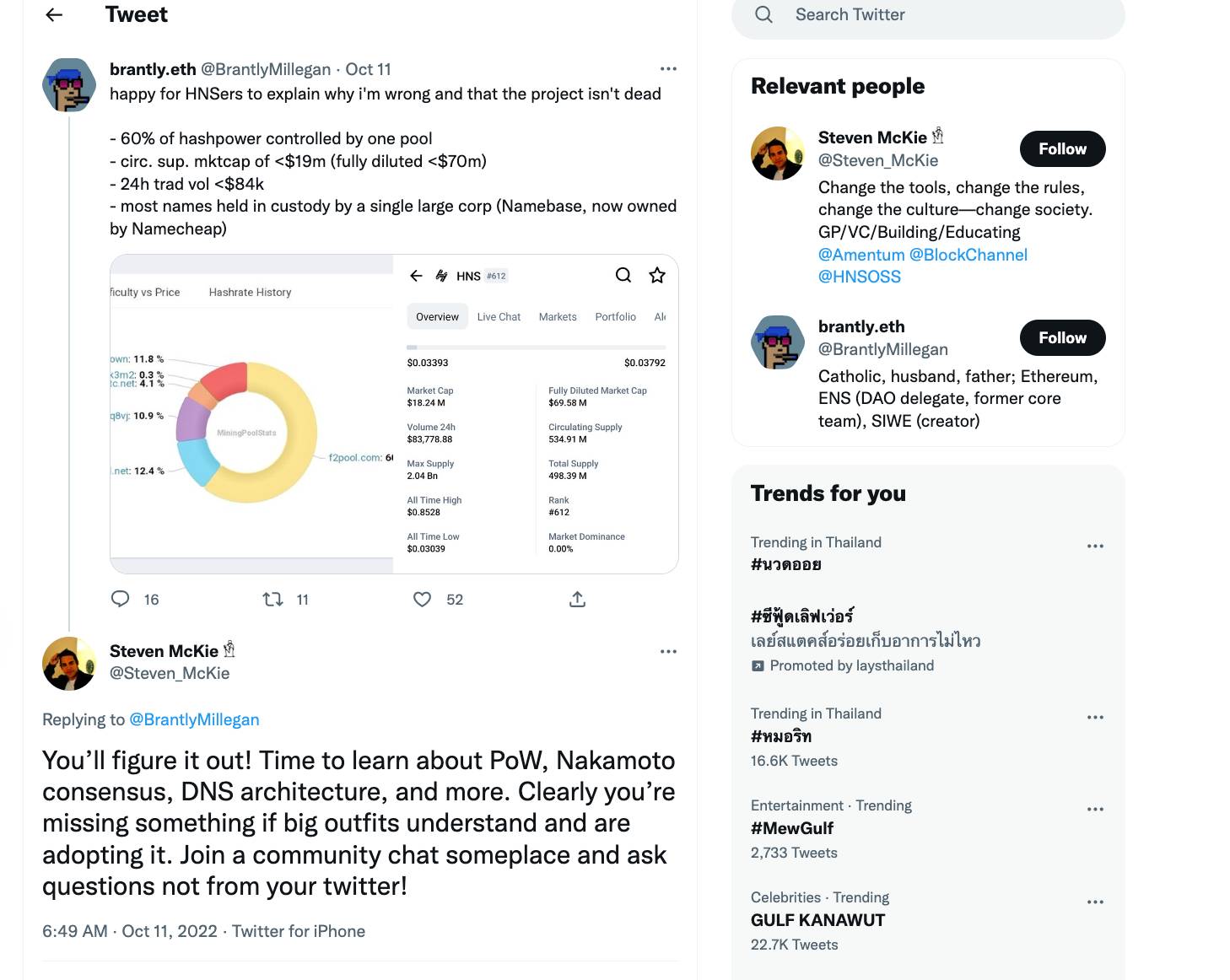 You’ll figure it out! Time to learn about PoW, Nakamoto consensus, DNS architecture, and more. Clearly you’re missing something if big outfits understand and are adopting it. Join a community chat someplace and ask questions not from your twitter!

I am making this guide not to try to pull one blockchain down - but to raise awareness. People (myself included) are often blinded by money and greed.

We need to stay diligent to understand how the future of the blockchain is decided. Who is the decision maker?

How can I make my voice heard?

Are we simply moving the current power and control oof the world and placing it on the blockchain? Or are we making a web3 that is owned and controlled by the people?

More tweets asking Eth about OFAC but no response. What happens when it is 100% OFAC?

Wait till the end. 👇

#FTX CEO has lost the plot IMO. This guy does not deserve what crypto has to offer.

I'd be very careful about anything this guy touches.

He should not do interviews either. 😅 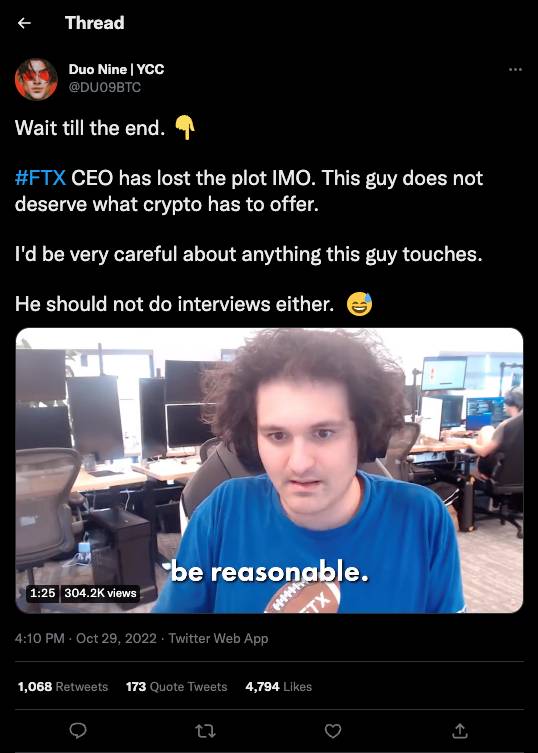 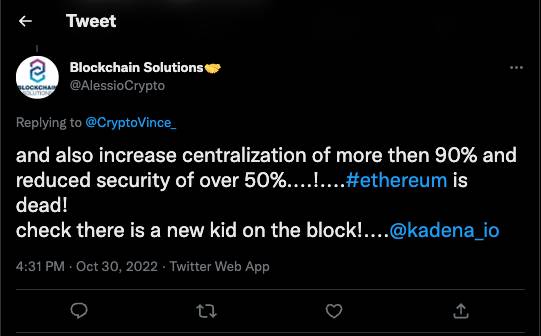 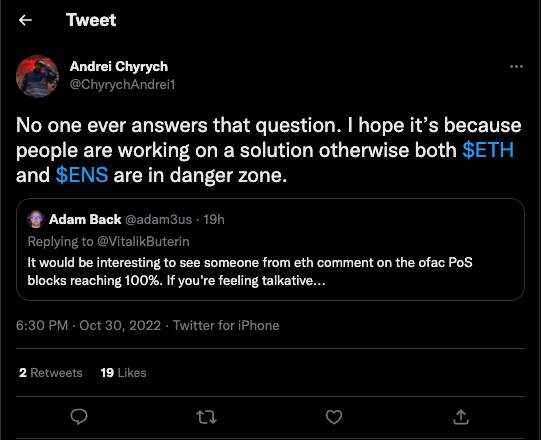