Web3 domains WITHOUT a "Root Zone" and DNS functionality is NOT "Web3".

Domains slapped onto a 'Smart Contract' are orphaned names that are incompatible with existing DNS infrastructure.

Please DYOR before spending a ton of your hard earned Money !! 🙏🏿 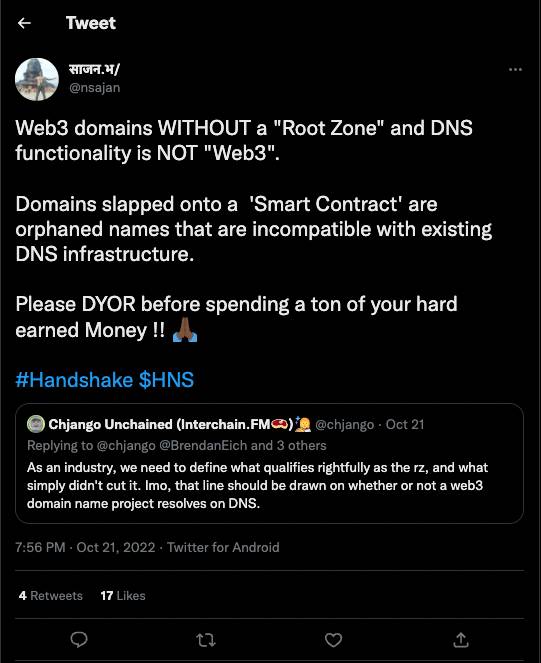 Brendan retweeted my tweet 🤝 I think there should be more of a push to define what constitutes as a root zone. If we don't do this, alllll of the future incoming naming projects are going to replicate UD's model to try and compete on the root zone level. They're all taking the easy route too, which is to just _say_ you're a root zone project, slap a smart contract so you can call it "web3" and not do any of the actual heavy lifting that Handshake has done to physically integrate with DNS.

Otherwise, if we don't push for this, then it makes spinning up a rz costless and it increases name collisions and the massive shitstorm that will ensue w hundreds of colliding naming projects all trying to claim their's is the true root zone

I hope the .wallet case establishes this definition and sets the right precedent and framework going forward

Otherwise we're in for a clusterf*ck 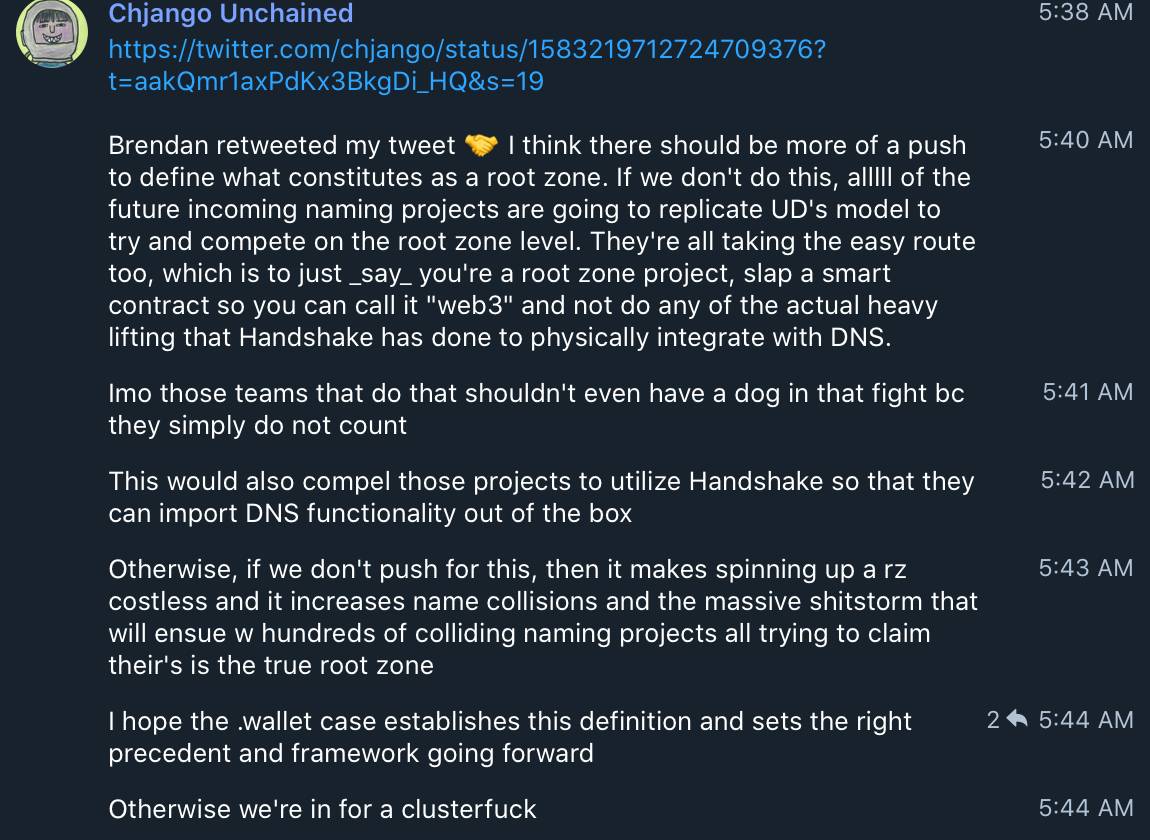 As an industry, we need to define what qualifies rightfully as the rz, and what simply didn't cut it. Imo, that line should be drawn on whether or not a web3 domain name project resolves on DNS. 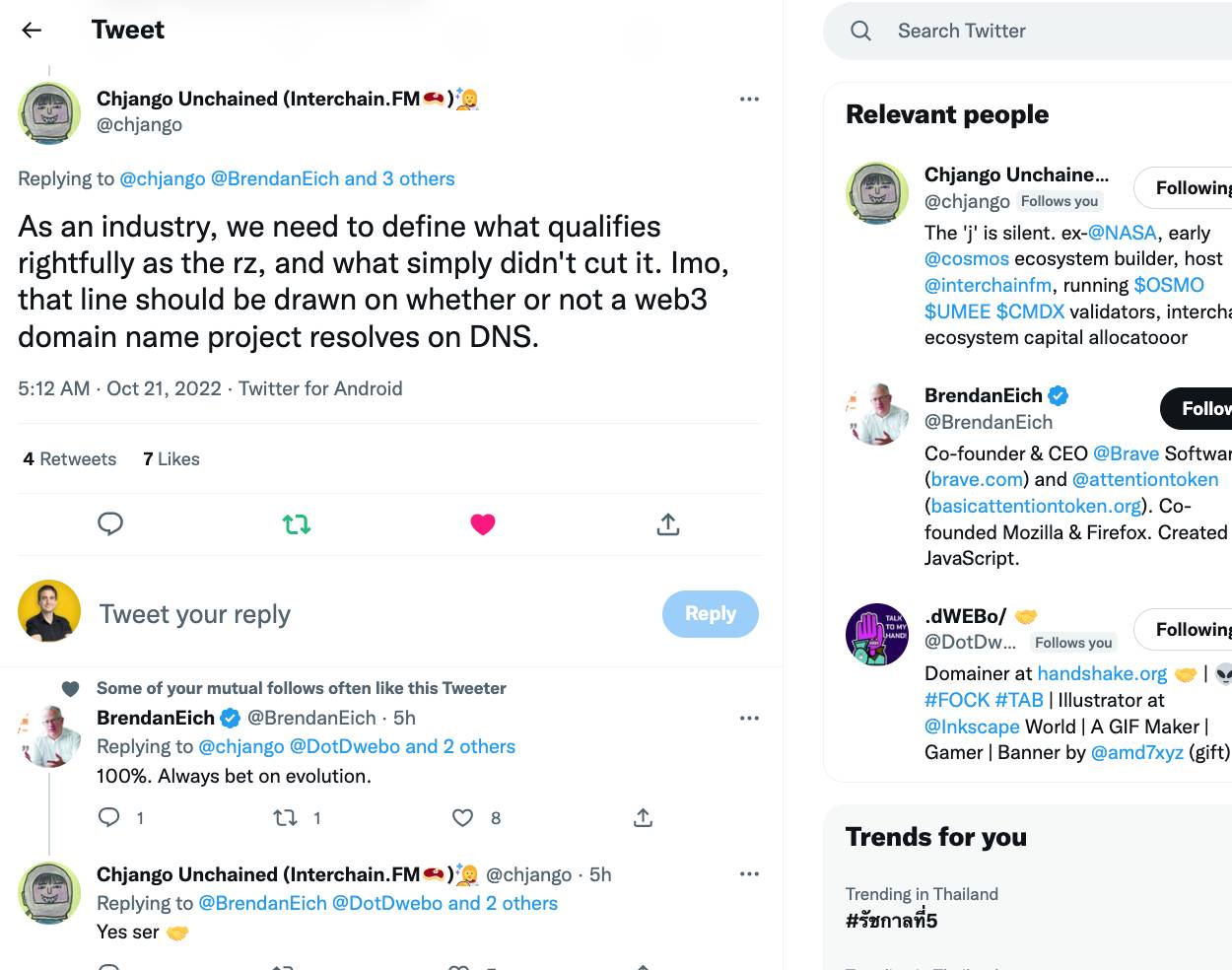 @BrendanEich (An opinion on Handshake from @javascript creator)
Note: I try not to use the "Appeal to Authority-Logical Fallacy", but to be honest, his opinion is quite refreshing to me personally.
I'm an HNS TLD Holder, so I may be biased. 🤝

I see two issues mixed together — I mixed too, so no appeal to authority:

1. Does neoNS mirror registrations into the DNS, so they can’t be pulled by the neoNS entity?
2. Does neoNS promise buy once / own forever?

My position:
1/ good, but costlier;
2: nope, because TANSTAAFL.

Are you asking about how @Namecheap handles name collisions? E.g. ICANN registers .music but NC sells HNS .music? Or are you asking whether or not NC can pull certain SLDs and unilaterally stop supporting names on its nameserver?

BrendanEich @BrendanEich
Both, because collision led to pull in the other instance discussed here.

The examples are orthogonal. For .wallet, gateway pulled it bc it couldn't afford a lawsuit w UD. But .wallet still existed on HNS blockchain/continues to be owned by Scott & he could've relisted it on another registrar that would list it.

On the SLD side, if NC wanted to censor a specific SLD, it could pull it & rugpull the SLD buyers & risk losing reputation bc of disgruntled buyers. So the play would be for the registrar to find any potential collisions 1st & if found, blacklist the colliding TLD in question.

BrendanEich @BrendanEich
That would be the conservative play. Is there a more constructive way to go? It still seems to me that dual registration (DNS and HNS) gives best of both worlds. What am I missing?

Chjango Unchained (Interchain.FM🥩)👩‍🚀 @chjango
Dual reg would be the way to go. The way I think about it is: HNS chain's root zone is a superset of ICANN's rz. It made a good faith effort to include all ICANN's existing TLDs so that no collision could happen & that all legacy owners are also on HNS. Few exceptions apply.

.music is an edge case bc of timing. But going fwd, should icann register new TLDs, the ideal thing to do is to reserve those on HNS as well. They're aware of HNS so optimistically this can happen. The wrench in this whole scheme is when TLD projects like UD enter w/o any rz (root zone) then claim to have rights to certain TLDs. When the game is opened up that way, this allows for _any_ project to write a smart contract (trivial when it's not plugged into DNS) and claim that _it_ is the true rz. Which is why the .wallet case will be a precedent setting case.

As an industry, we need to define what qualifies rightfully as the RZ root zone, and what simply didn't cut it. Imo, that line should be drawn on whether or not a web3 domain name project resolves on DNS.