Definitely a never ending saga in the ever-evolving land of web3 blockchain domains.

Today we are getting some “closure” on the question many in Handshake have asked:

We noticed shortly after their latest VC round of fundraising, the .coin domain extension of the UD system of issuing TLDs was no longer available. In the Unstoppable Discord, we were shown screenshots of customers asking and the UD community management team saying “stay tuned” with no official announcements.

“Right now” or more like for 2 months. Why would there be a maintenance for 2 months only for .coin and not for all other domains? They all use the same smart contract. 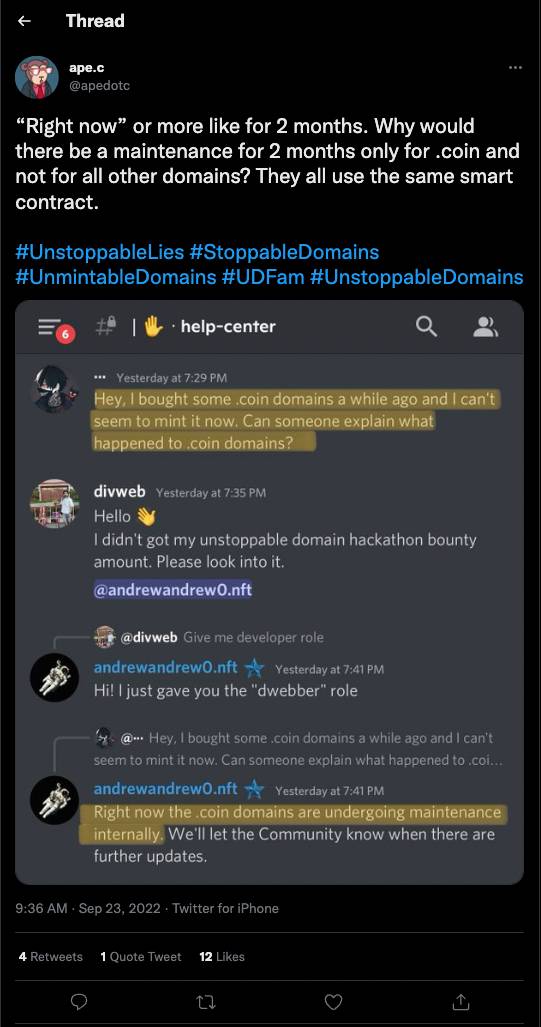 UD team talking badly about Handshake and decentralization in general

If blockchain domain systems were represented as a human body, then ENS would be the heart, UD the brain, and HNS the butthole. 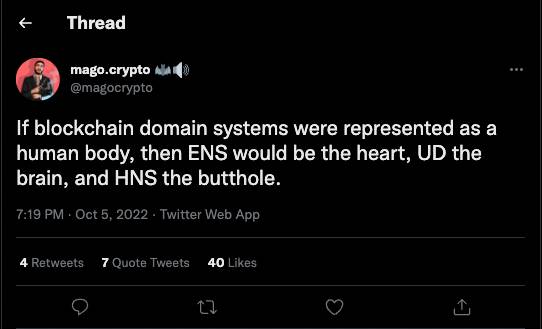 Domains should be user-owned, that's what matters. 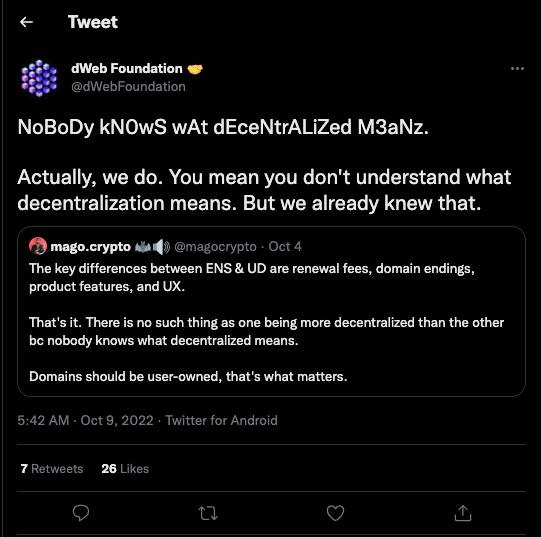 Handshake. Handshake going to zero. There I said it. Hope that helps. 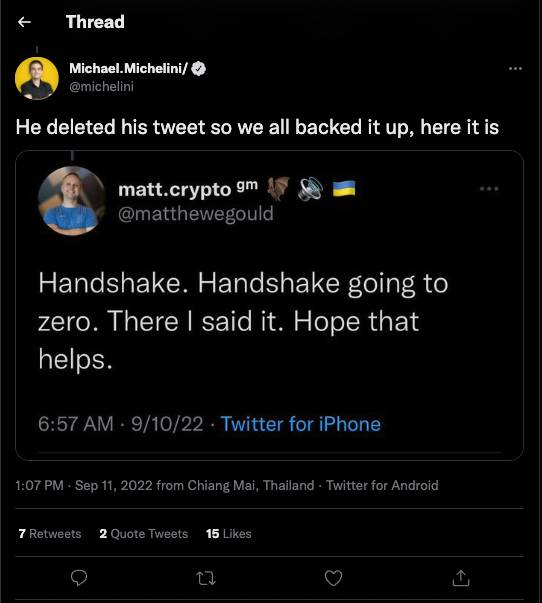 that's it. ENS is the only blockchain naming project still standing. happened a lot faster than I expected but here we are 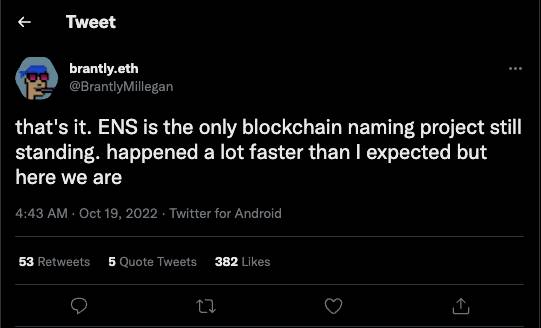 Well - The Mystery of the .coin domain extension of Unstoppable Is Answered

They have canceled their .coin domains.

Important: We became aware of a potential collision with .coin and have decided to stop supporting .coin domains. We’re offering .coin domain owners credit of 3x what they paid. 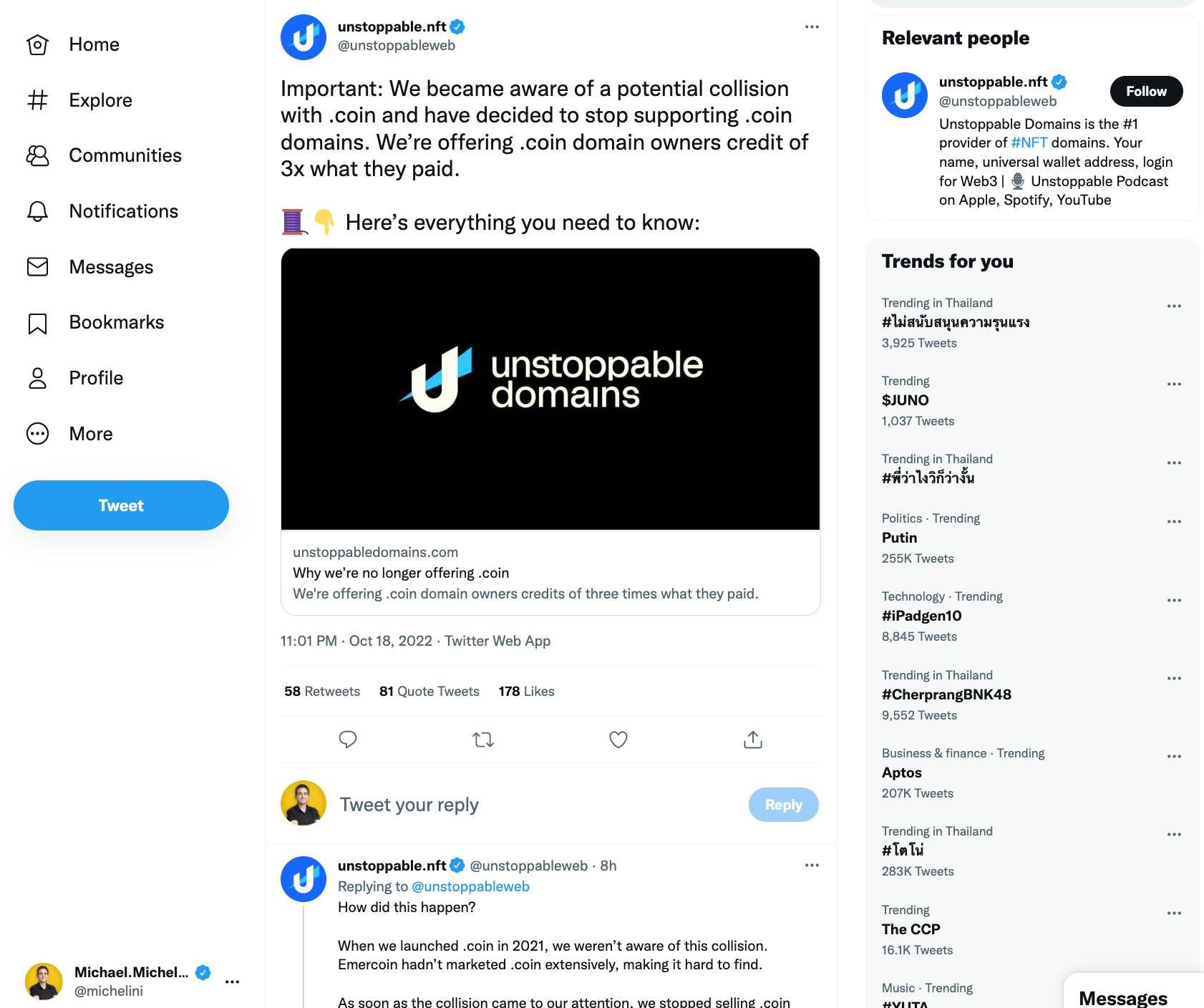 They have stopped, yes - unstoppable domains stopped - the validness of the .coin domain names.

This is earth shattering too the entire business model of blockchain domains.

Or this is totally normal for a blockchain based, web3 domain name system to cancel and refund domains?

Well - The Mystery of the .coin domain extension of Unstoppable Is Answered

So Unstoppable says “but you can still own the words you paid us for on the Ethereum blockchain or wherever you minted.

From their blog announcement:

What to know if you own .coin

As of today, we've disabled .coin resolution in our libraries and services. Unstoppable domains are self-custodied NFTs, so you still own your .coin domain, but it won’t work with our resolution services or integrations.

We're offering .coin holders three times the purchase price of their domains in credits upon their successful return, which you can initiate in the My Domains section of the website.

to buy more UD domains that will have similar fates in the future? If I was a customer, I’d ask for cash, not credits.

We are indeed offering refunds if people prefer, or 3x credits. 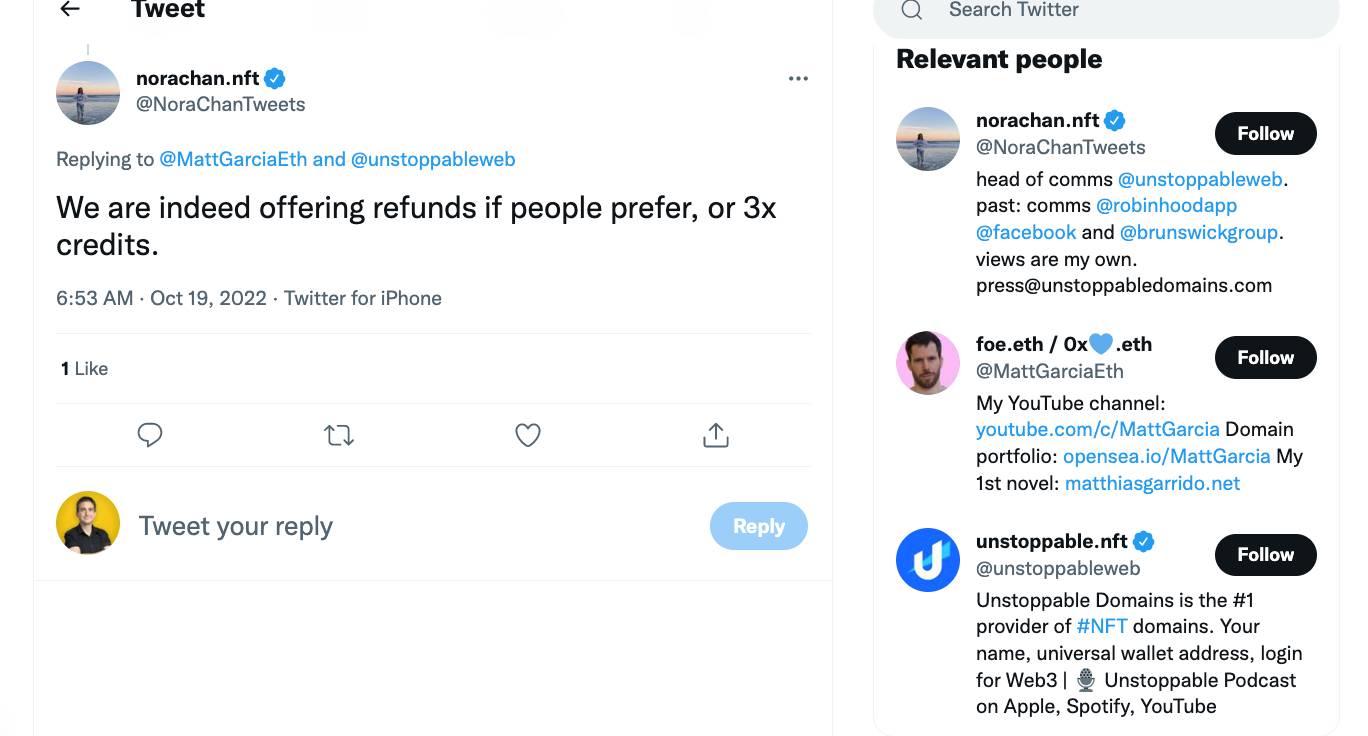 All naming systems need integrations with apps to be useful. UD is no different from other naming systems in this regard & gives you an asset you control forever (true even for .coin). Apps will decide which naming systems to support. That’s social convention, not centralization. 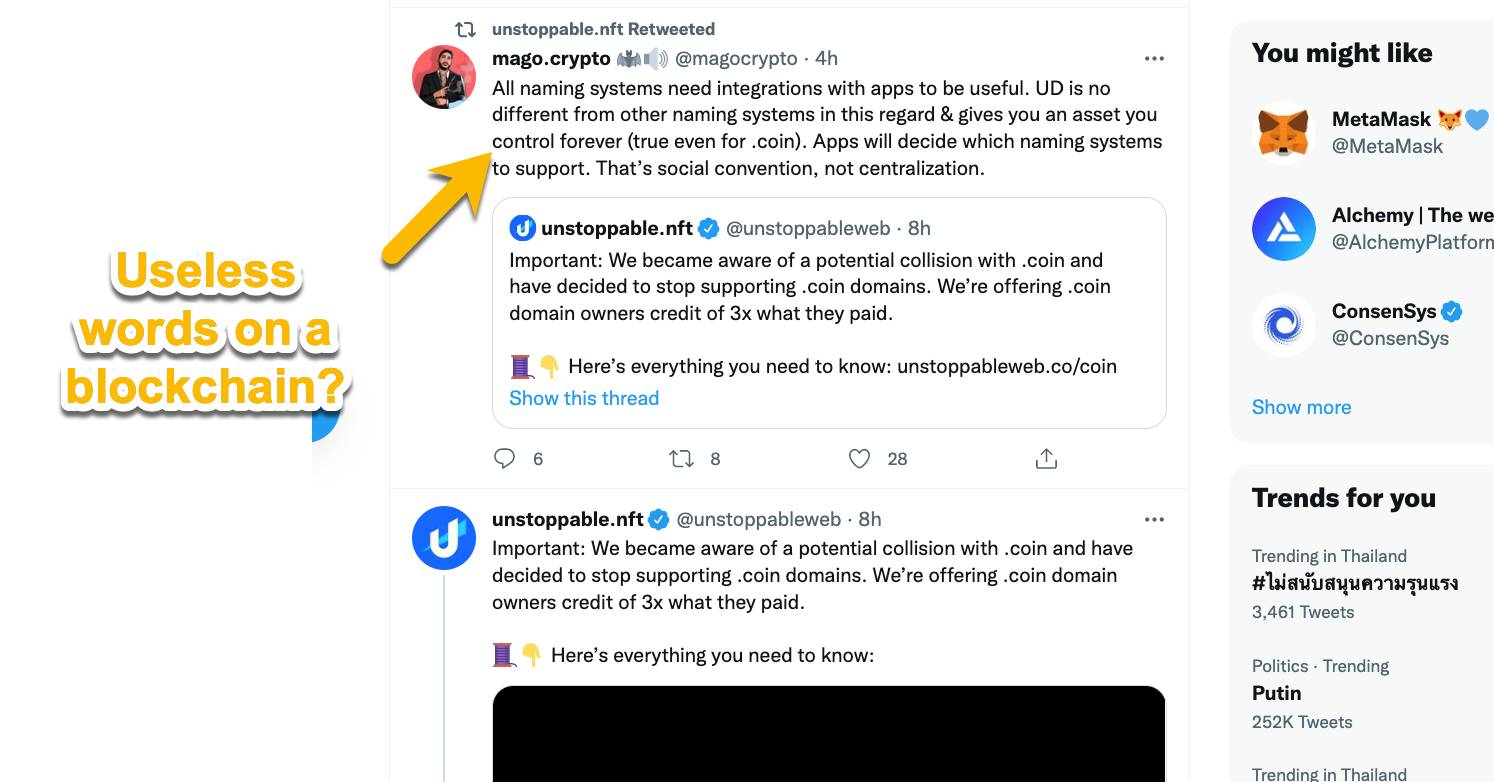 BUT THEY ARE JUST WORD NFT - same as some monkey JPG.

They do not work in the Unstoppable Domain system.

“All the integrations” that make it so valuable - are canceled, void, and gone.

So what is the value now?

Let Us See How their Legal Battle vs Handshake on .wallet goes

UD is at risk of losing the .wallet lawsuit in court. Contrary to the notion that it is on the attack, Scott Florsck filed his own lawsuit against UD 3 weeks ago, asking for declaratory judgment of non-infringement of the .wallet domain (& other claims). This is a problem for UD. 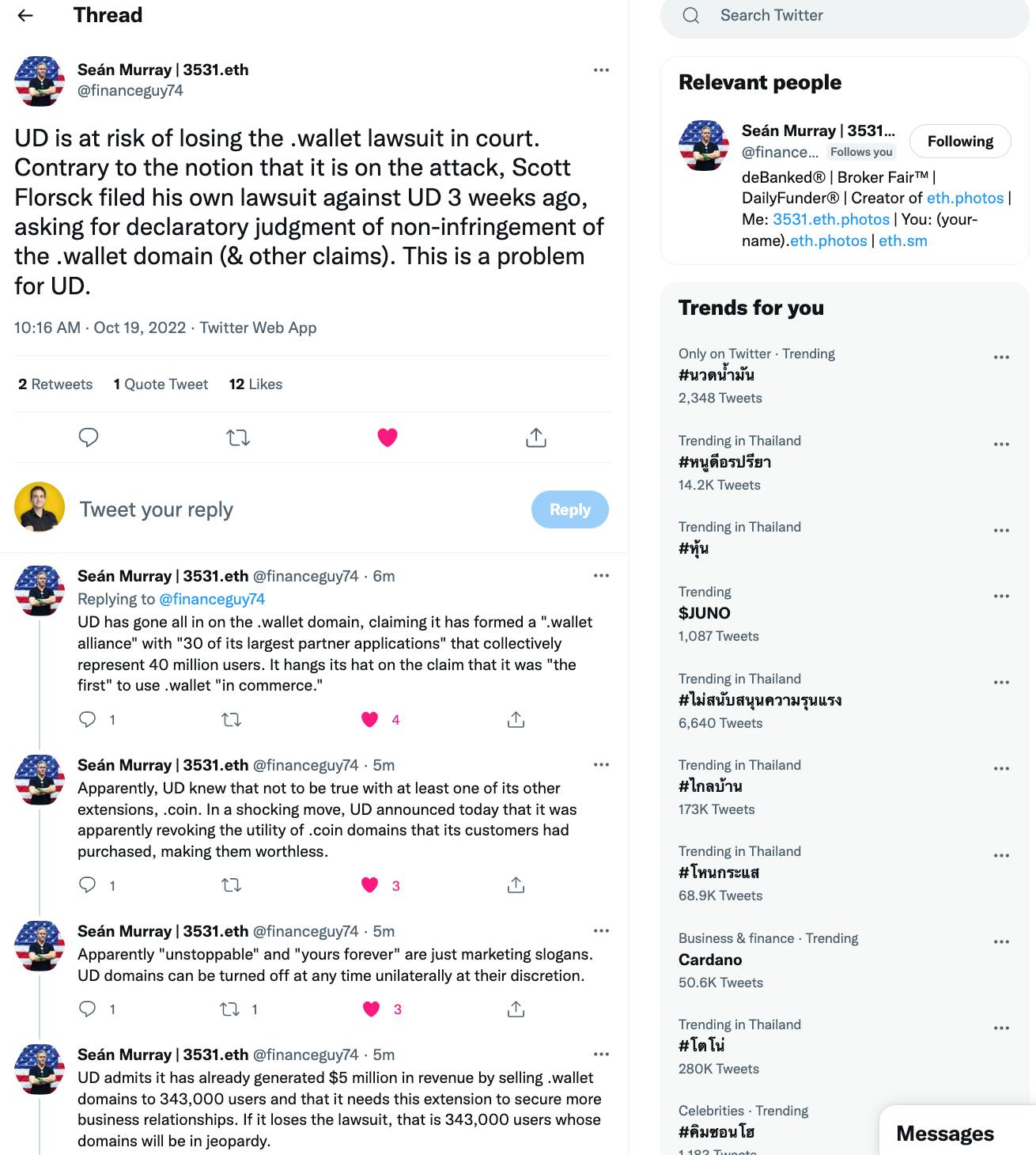 I can see a similar announcement from Unstoppable coming out like this .coin.

And then what about all the other baseless TLD domain extensions that were made up?

What about all the other collisions? 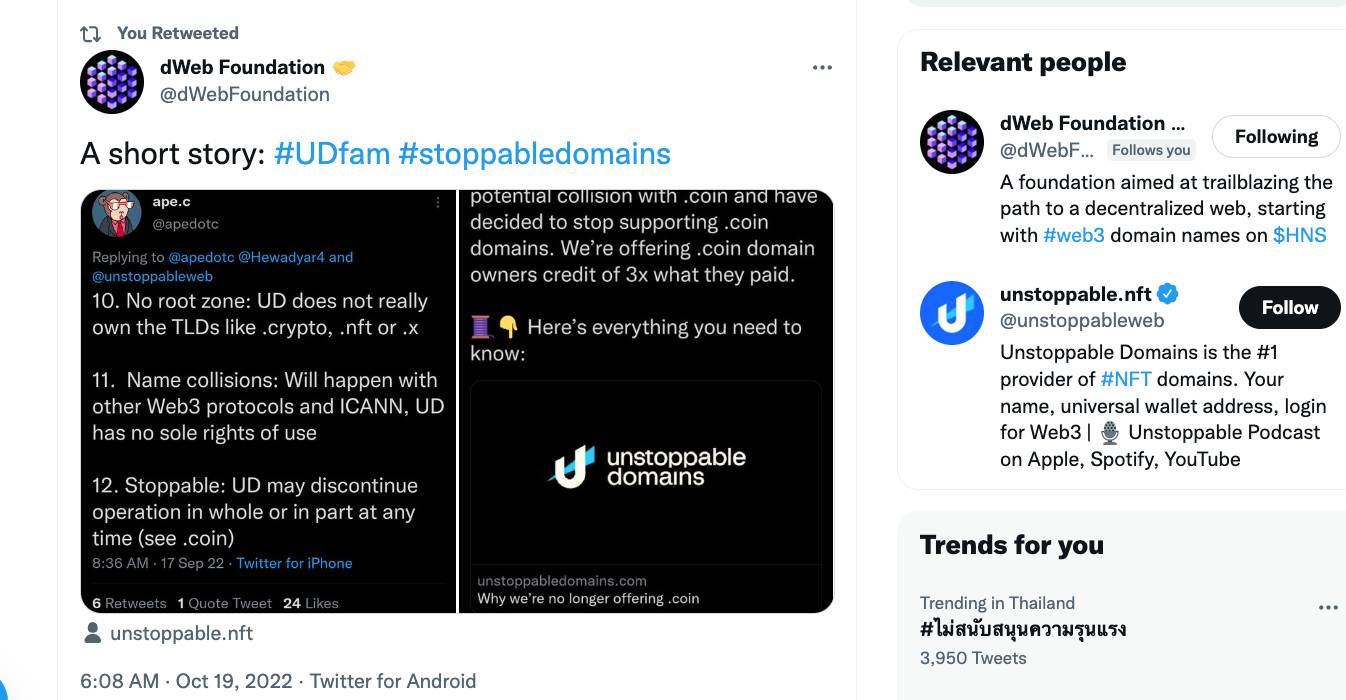 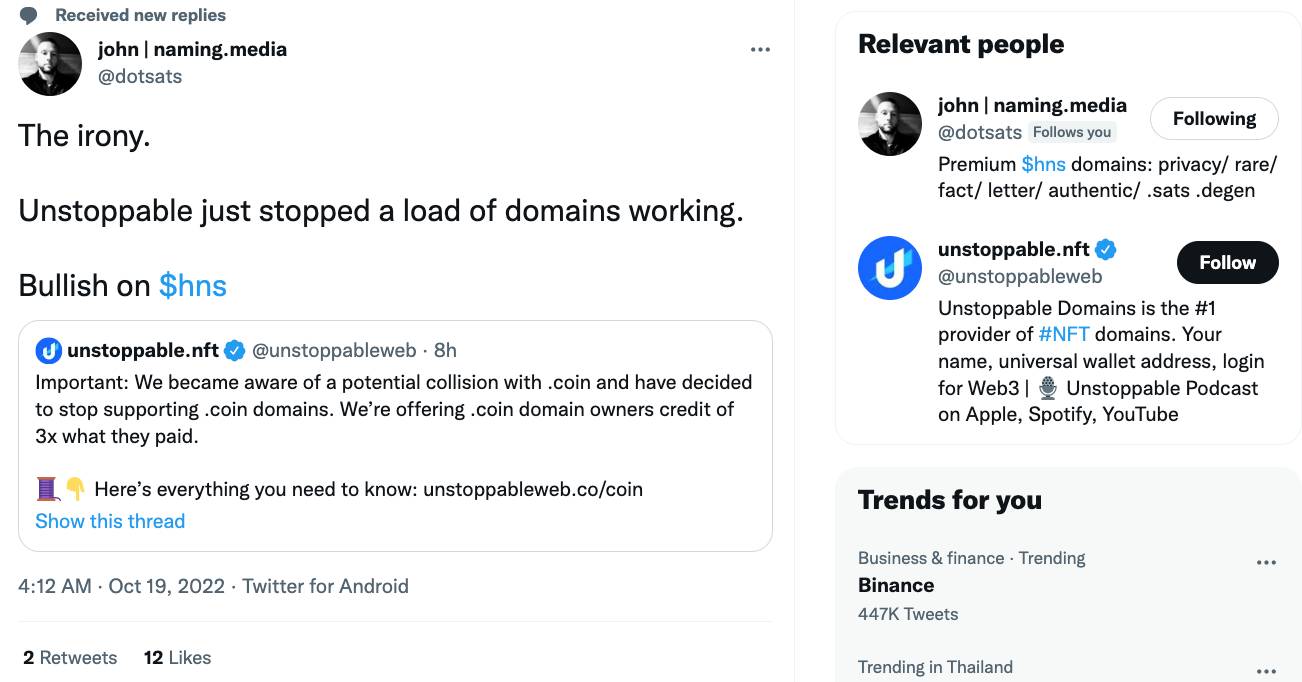 UD just turned the lights off on 116k .coin domains. "You still own the NFT, you just can't do anything with it now." Doesn't sound too decentralized or empowering. Hopefully this will wake people up.
https://twitter.com/namebasd/status/1582430296250626048

If the company can shut off access to all integrations do they really matter though?

> you find out you bought centralized domains

> they offer a refund so you want out

With #UnstoppableDomains Impending doom (writing is on the wall with .coin & .wallet), how long do you anticipate it will take until the rug pull happens and all names are worthless??

@matthewegould
After reviewing the surveillance camera footage, I am convinced that this is the incident where you lost .coin. Shall we go there together and have a look?

you can't make this up

Is there still no renewal fee for my domain??

Is it just a jpeg now?

Serious question for the #UDfam…are y’all looking at class-action lawsuits against #StoppableDomains for rug-pulling .coin?

They’ve got a billion dollar valuation and VCs with deep pockets. What’s stopping them from rug-pulling on another of their products?

Daily stats for Web3 domain names - NOW with Monthly Charts for .ETH and Unstoppable Domains. Handshake's chart is coming next! 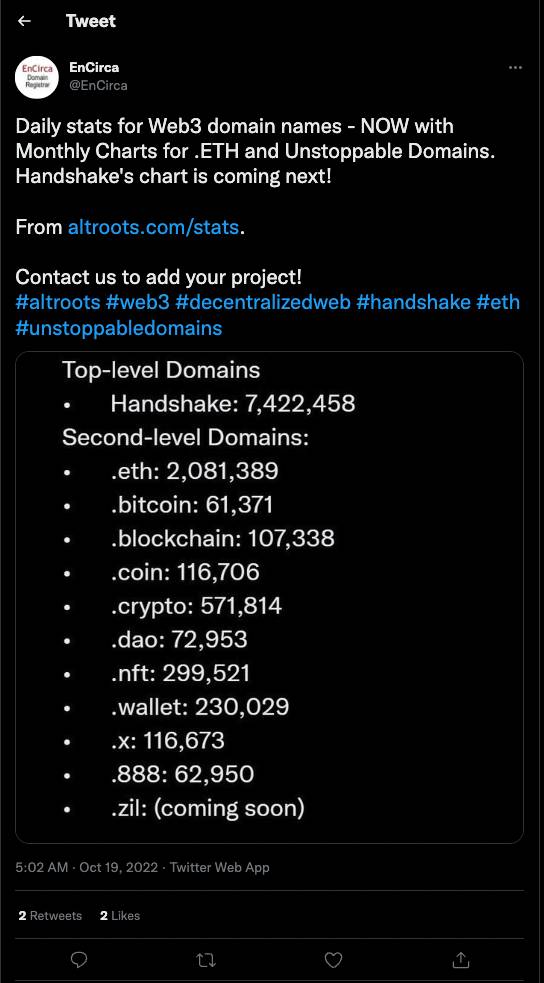 Handshake will not take away anything from owners of TLDs. It cannot.

Unstoppable can do what they did to .coin owners to any other domain they have.

Simply pull the plug and stop allowing the integrations they paid a lot of money for - to any other “domain” they have.

How is this at all decentralized?

How can this be web3?

This is a critical flaw in calling something decentralized and web3.

“But yes, the words on a blockchain are yours forever”

Yes - you can own words on the Ethereum or Polygon blockchain that were sold to you by a VC backed company - and say “I own these words in my wallet that don’t work as a username / wallet / domain name, but I do own these words”.

I am going to stick with this logic to help people understand.

SkyInclude could do the same thing. We could make a domain name system and sell them using our Stripe account, mint these words on various blockchains, call them domain names, and pay for them to work as logins and wallet addresses and pay browsers to resolve them.

We could also turn of the integration on various names in our system. We could be sued by companies or convinced in our board meeting by our investors to turn off domains for certain domain extensions or for certain domains.

And how could I possibly sleep at night as someone involved in that? It is the same as web2 domains.

Same Thing Can Happen on Decentraweb, Freename, and other team and Ethereum based blockchains

And what happens when lawsuits are issued to “teams” and centralized groups organizing domain sales on Decentraweb and Freename and the other huge list of upcoming web3 domain name system?

Even ENS? It is a DAO and we know who the owners are and those 7 keys can do similar things as Unstoppable can.

I have to say - since I am studying proof of work vs proof of stake - and censorship - I agree with the creators of Handshake of using POW.

I read that over 51% of ethereum validators are US government controlled .

Over 51% of Ethereum validators are OFAC compliant. Ethereum is pretty much under the control of the US government… 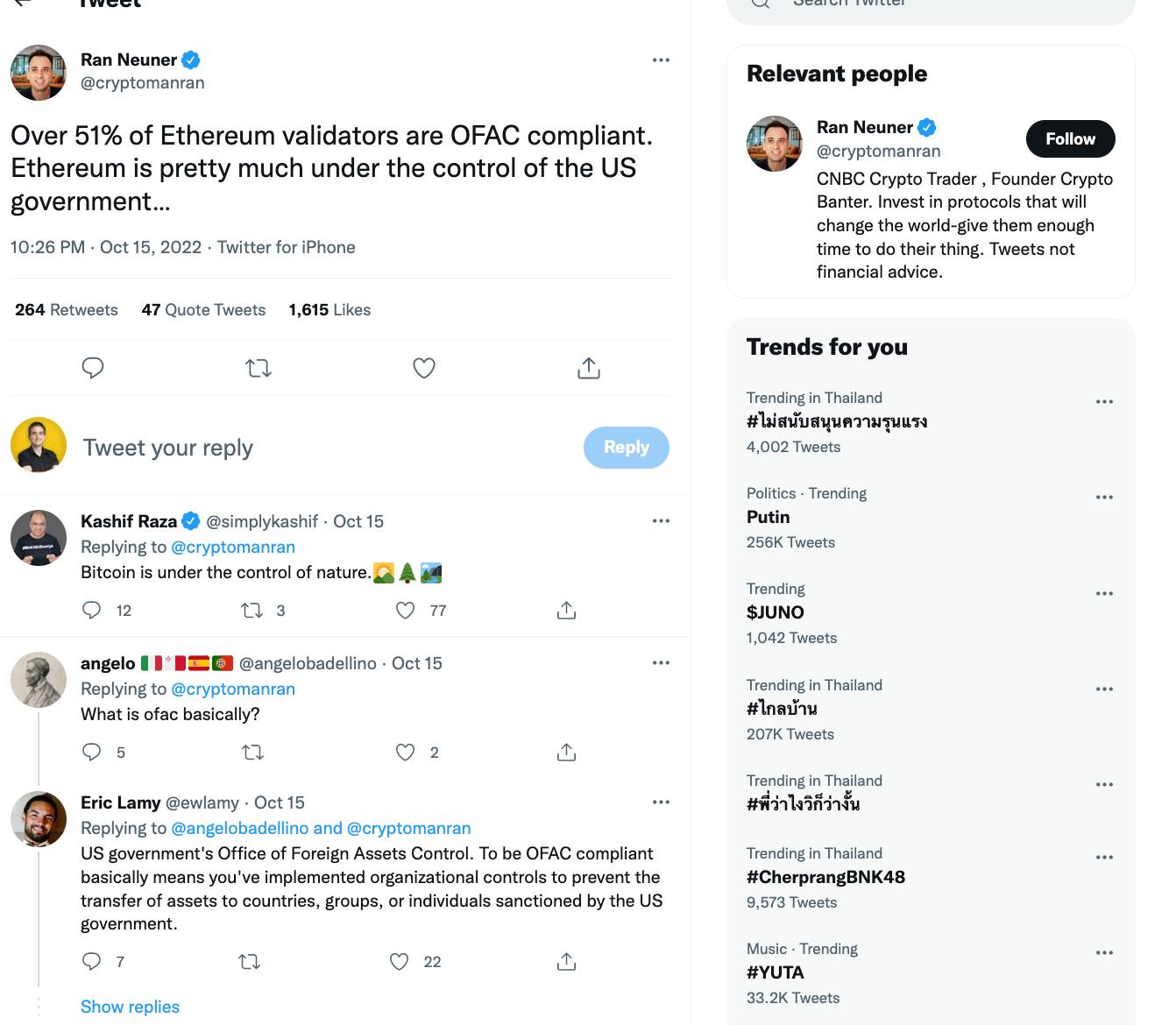 Well you can do OFAC compliant blocks in PoW, but then you need to have 51% hashrate and commit 51% attack everytime you see bad tx 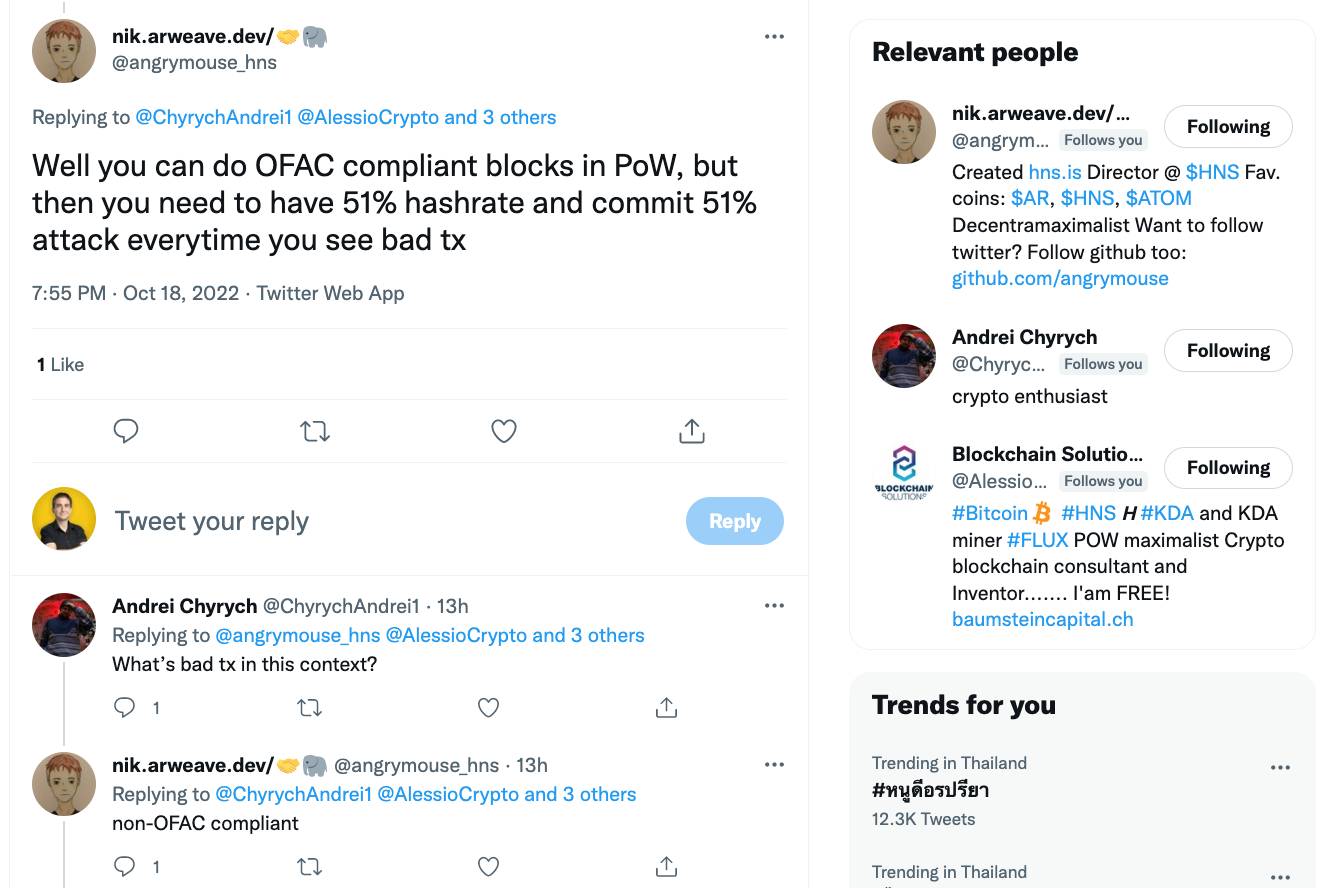 So why can’t the same censorship happen on the actual “blockchain” as all of this grows?

So you can stick your head in the sand and ignore it - I know many have invested a lot of money - or you can wake up and accept the reality of what these words on a blockchain really are.

The Connection of .coin and .wallet Legal case

Many are saying this .coin takedown is part of the legal proceedings.

Yes, it was sometime between Jul 23 and 27. The first complaint about .coin in the UD Discord is from Jul 26. 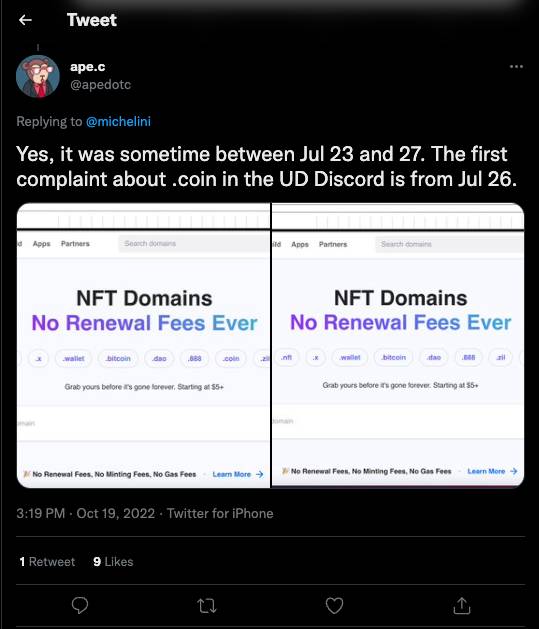 Some feel they hoped after scaring Gateway and winning the case they could simply re-enable it - but now that you are pursuing it - they had to actually stop selling it and refund.

Are you aware of this ? Interested to learn more insights from the community