We are getting amazing support from the community - thank you all!

These additional donations are coming:

Here are some people who would also like to have the integration made with Bob Wallet and have HNS funds to add to the bounty:

on top of Falci's bounty

Where do we send the HNS? Falci, will you be the one confirming the code has been done?

Excited to have more people in the community involved in the improvement of the protocol and the integrations. 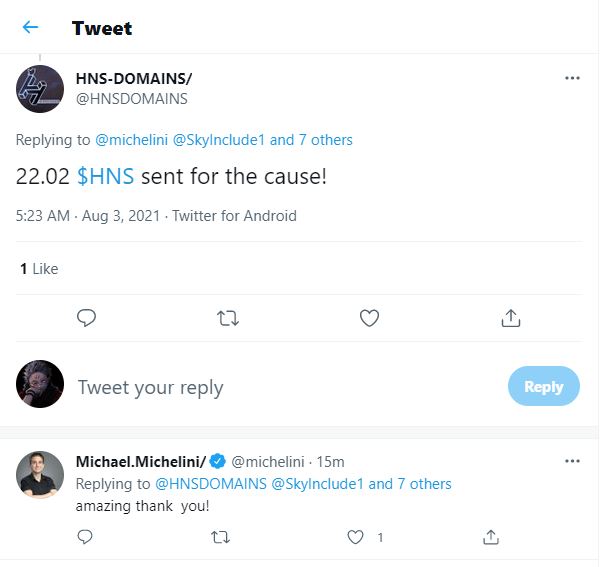 Fernando at Sinpa also has already gotten the well known wallet integrated on his app:

We are happy to see Fernando at Sinpa has gotten the ability for those using his service to add their own HNS address to their TLDs.

Here’s a screenshot of flamingohandshake/ set to go to an HNS address.

After that amazing session w/ Matt Zipkin on governance and HIP (Handshake Improvement Proposals) skyinclude.com/hip/ - it has gotten me down the rabbit hole of the HIP002 - using your Handshake TLD domain name as a wallet address. Lets call it a payment address

It was proposed in October 2020 (wow!) and has been waiting for more interest and movement - so let us work together to make this happen.

You can read these links
https://hsd-dev.org/HIPs/proposals/0002/

I’ve been dabbling in Ethereum and NFTs there and many love the ability to use a .eth address to transfer eth token and NFTs to each other (I have to say I’ve used it myself with the skyinclude.eth) - But you know what - there is no privacy there. People can look up that exact address and then see all the activity of it over time.

With this HIP002 - you set the HNS (or other address, such as ETH, BTC) to whatever address you want. It can be a brand new wallet you just setup, that you want to use to receive funds or names. It can be updated later, it is flexible.

So I asked Fernando, how can I / non-developer community members push this through?

He told me he can make it in his Sinpa (skyinclude.com/sinpa) - but needs the Bob Wallet team to implement it on their side. He has put up a 400 HNS bounty for a developer to make that integration - and even said he can increase that bounty now.

Ways we can help:

Add to that bounty to have it implemented.