Latest on .Wallet Drama and Unstoppable Domains vs Handshake

Just a quick update on the .wallet case - the USPTO has made a final decision to decline Unstoppable Domain Inc’s application for the .wallet trademark.

I know we’ve been quite here at SkyInclude on the progress - that is simply because so much is happening behind the scenes. But we are equal to you, we have Handshake HNNS domains (.wallet, .c, etc) stuck in the bankrupt Gateway registrar. Yet we are confident we will be getting them soon enough.

Update: It’s final. The Trademark Office maintained and finalized the refusal for the trademark application. #StoppableDomains doesn’t hold and will never hodl trademark rights for wallet and .wallet. This is not likely to strengthen their strange position in court. 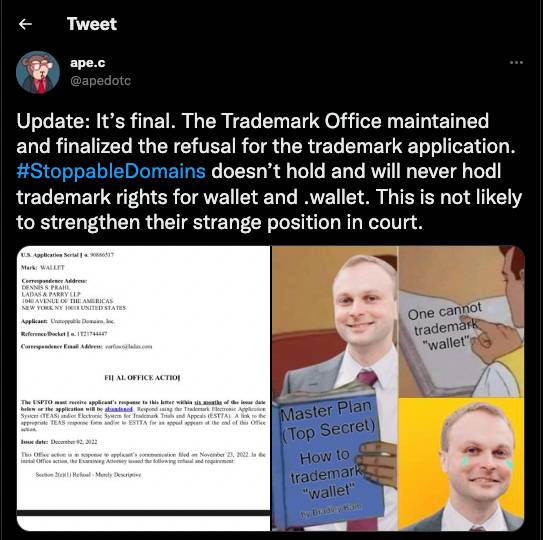 Latest on .Wallet Drama and Unstoppable Domains vs Handshake

I know I have not had many updates on Skyinclude Channel lately - for personal reasons (moved from China to Thailand with my family of 4 and got my children into a new school here). Some have asked why I am quiet on the .wallet case after promoting it. 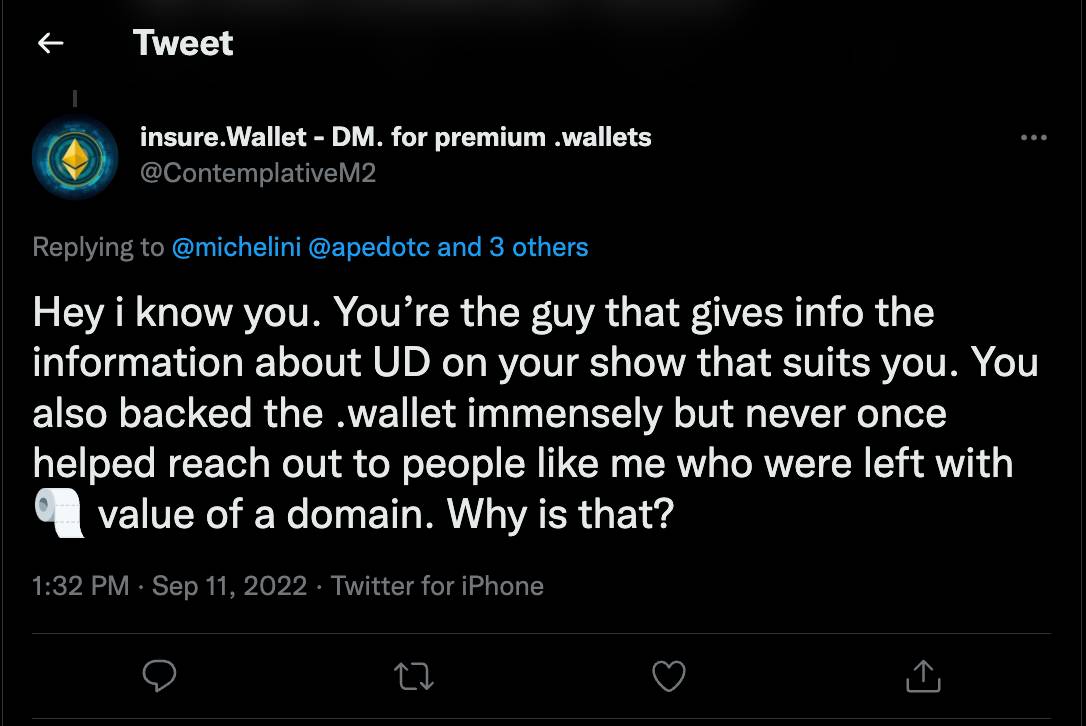 First - I have been asked to be quiet - because there is a lot behind the scenes that is brewing on that case to send back to Unstoppable and it will all come in time. Second, I want to use this as a time to explain more to those not familiar with Handshake, the ecosystem that there is.

Gateway is (most likely at this point “was”) a private company that issued SLD (domains) of Handshake TLDs in a traditional (aka centralized) manner. The various reasons the .wallet owner decided to put his TLD there was to support Gateway (as there was transitioning to Namebase Registry and they needed TLDs) as well as to more quickly get things out. The reason domains people purchased were frozen or lost during the lawsuit and freeze was - this is a centralized registrar/registry and that can happen (it can also happen on any web2 or traditional domain registrar).

Even before the .wallet was “staked” on Gateway, many suggested it to be put on a decentralized registrar- but at the time Impervious didn’t have their staking program, and there are not many other options for the “normal” Handshake director (without a lot of code).

The .wallet names people have purchased (myself included) are “safu” (safe). I am in a point where I have to still refrain from sharing all details, but I am not worried about getting my .wallet names back (in an even better format) later. The $1.99 USD invested is a clear positive ROI.

And for the record, I did this promotion for the better of the Handshake community. Sure, on our marketing and blogs we put a Gateway affiliate ID on the links (which did generate thousands of sales) - but didn’t collect the $500 or so USD in affiliate earnings (as they closed before paying out). So I am as “out” as any others who made those purchases - at the moment.

Now, to answer some other questions: 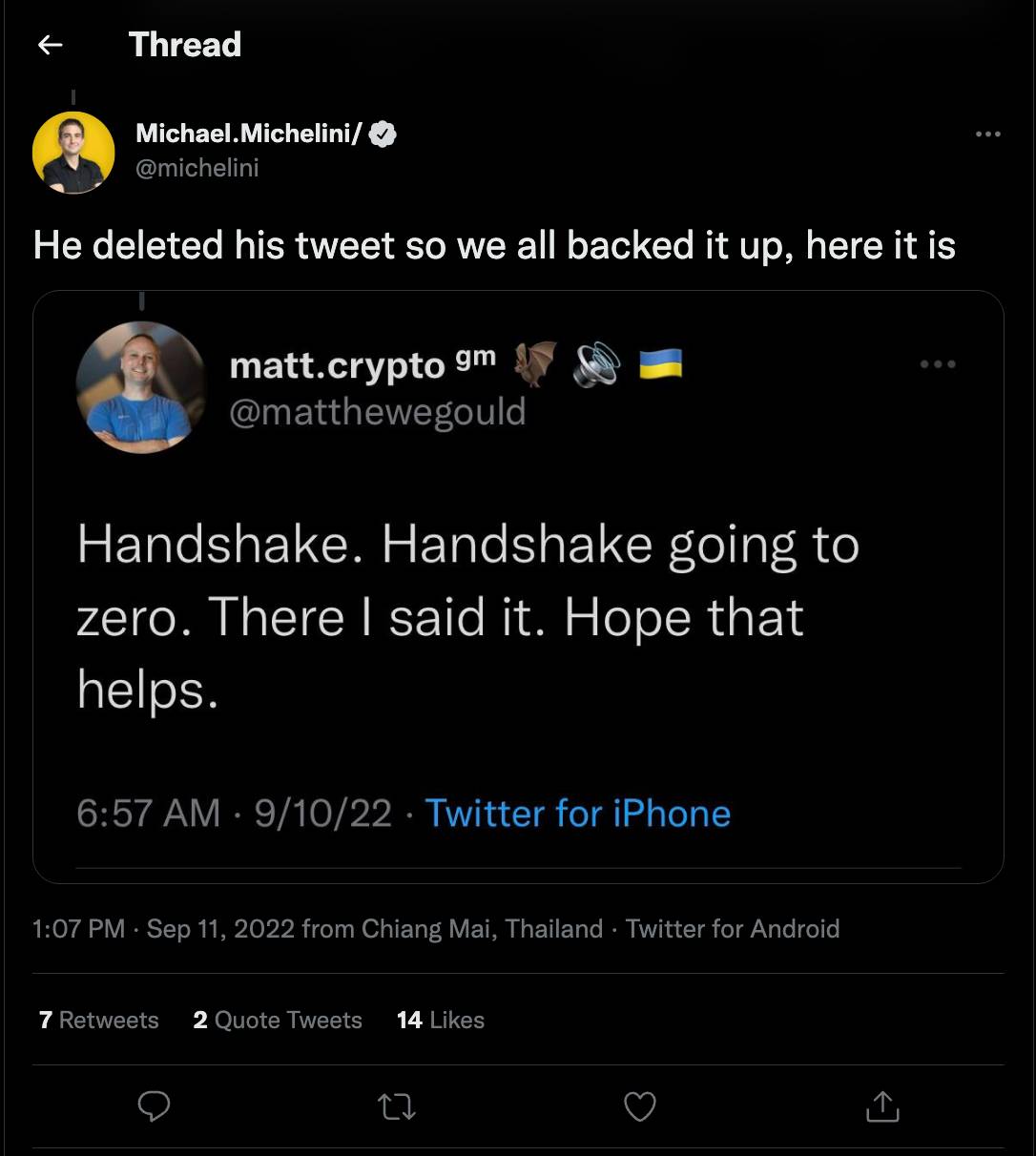 And I saw this as a massive bullish sign for Handshake. We will unite - as there has been some fragmentation in the Handshake ecosystem ( Impervious, Gateway, Namecheap, Namebase, and various sides, etc) - I see all working together for the betterment of the protocol - and to fight against VC backed centralized US startups that think they can dominate anyone they want with their lawyers.

And their customers think they are part of their community? Sure, in the form of a customer in a traditional domain sense like a web2 format - but nothing like web3 ownership.

It is best by checking out JJ, the co-founder of Handshake protocol, and Chjango from dWEb Foundation to highlight this during the Namescon Panel with Matt.crypto earlier this month

Also JJ highlights in this tweet code Unstoppable took from his open source code and simply removed the license in the Zilliqa instance of Unstopabble’s earlier days. 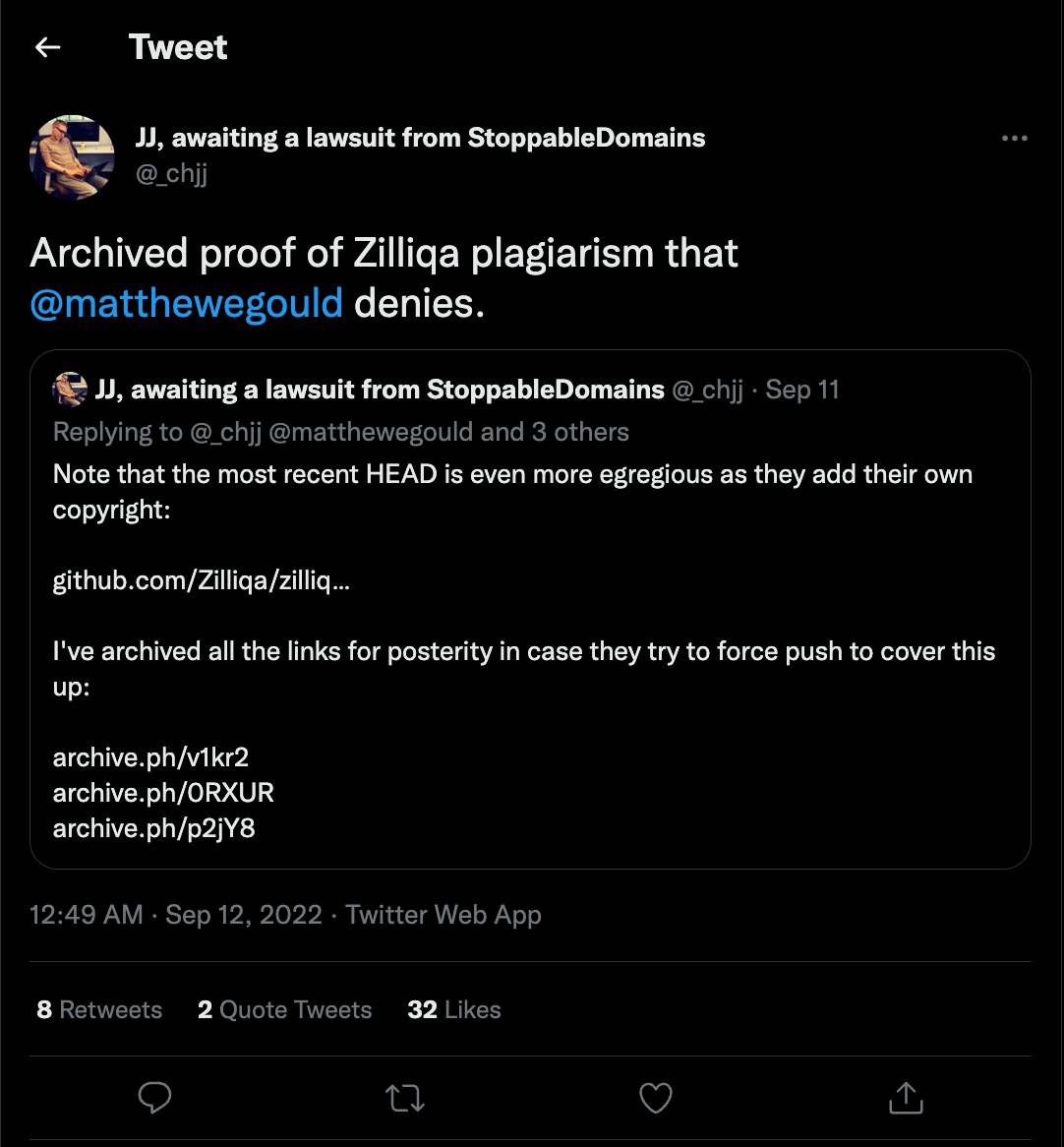 As well as others in the ENS community who claim Unstoppable has used their code without credit.
Copied ENS code and removed license for .zil 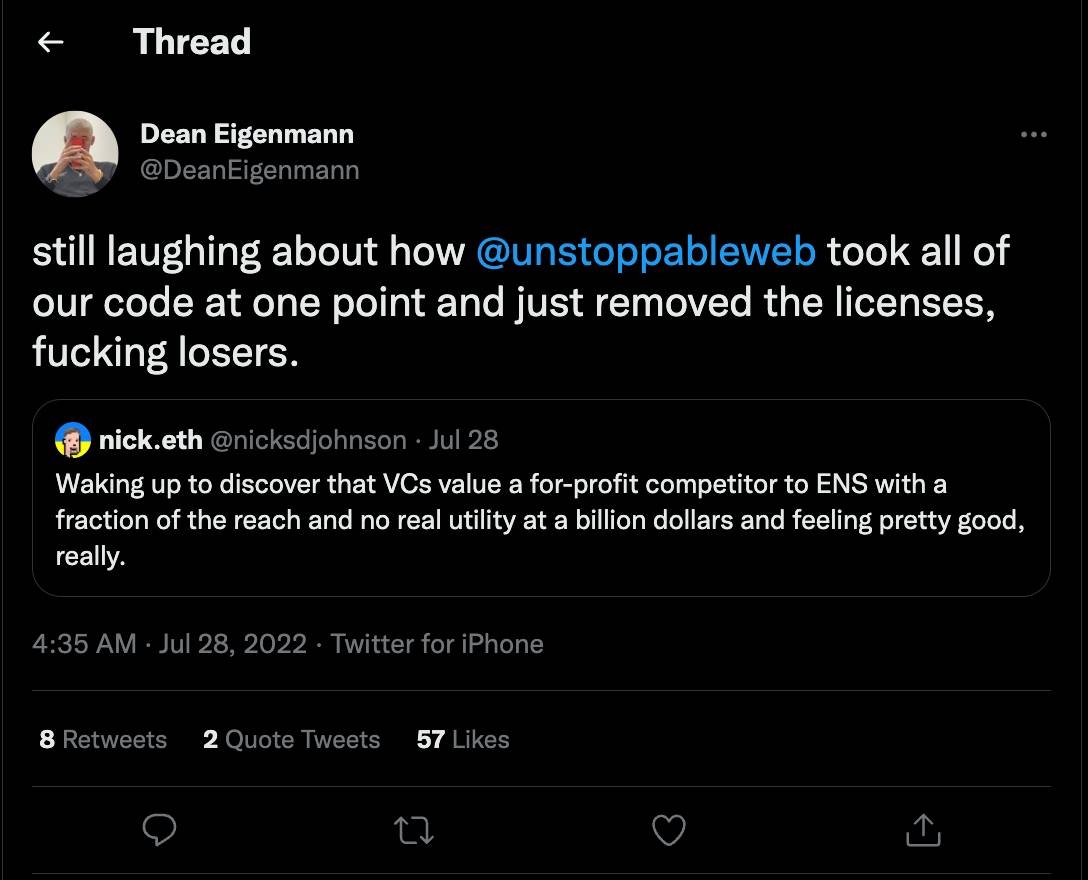 Scott, the .wallet owner on Handshake, gave me this great clip on why lifetime domains is unsustainable

If you have a product, ANY product, and you say we're going to provide maintenance on it forever without any fees, the obvious question one would ask is... how are you going to cover the maintenance costs once the capital is gone and you're left with a million customers whose product you're maintaining? The only answer is: well we're going to come out with new products and sell those to new customers and use that revenue stream, and when we blow through that, we'll come out with more new products and sell those to a new layer of customers, and use that capital, etc. That's called a pyramid scheme. Except it's not really shaped like a pyramid, because it's not solid at the bottom. It's more like a jenga tower.

Here's a site that explains how it works with gold. Just substitute "gold" in this note for "unstoppable domains"...

What Does a Gold Purchasing Pyramid Scheme Look Like?
Savvy investors know how to spot a pyramid scheme and avoid missing out on the long-term benefits that authenticated gold investments bring across a lifetime. A pyramid scheme for gold purchasing is a scam that misinforms investors on the value or availability of the gold and how they are spending their money. Unfortunately, no two gold scams are identical.

Some pyramid schemes scam investors by misrepresenting the market prices of gold and tricking potential investors into paying more than necessary. They keep the extra money for themselves. 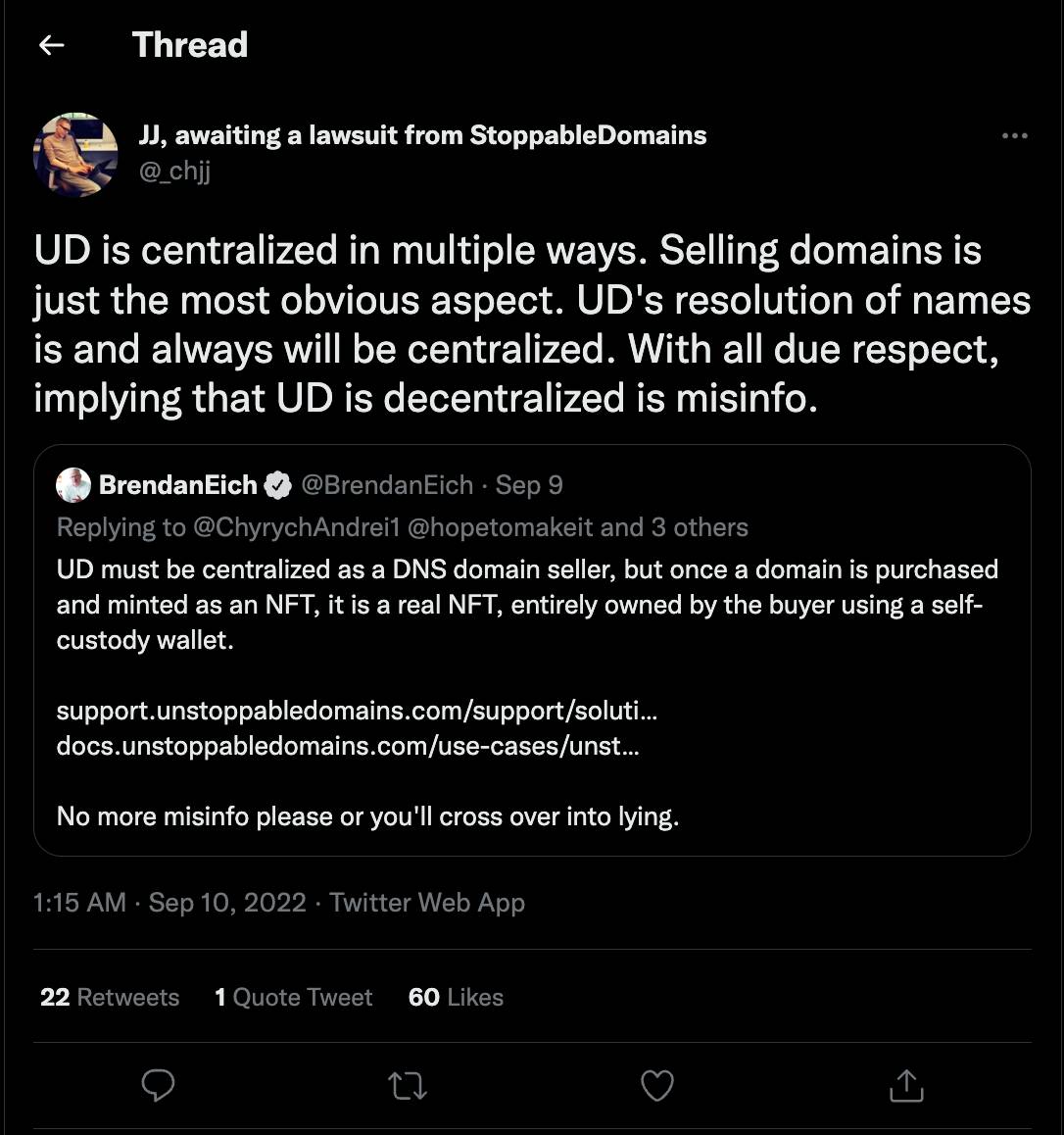 So who is the aggressor here?

Who Can Go To Zero And Still Survive? UD or HNS?

As far as this tweet, can Handshake go to 0 and still operate 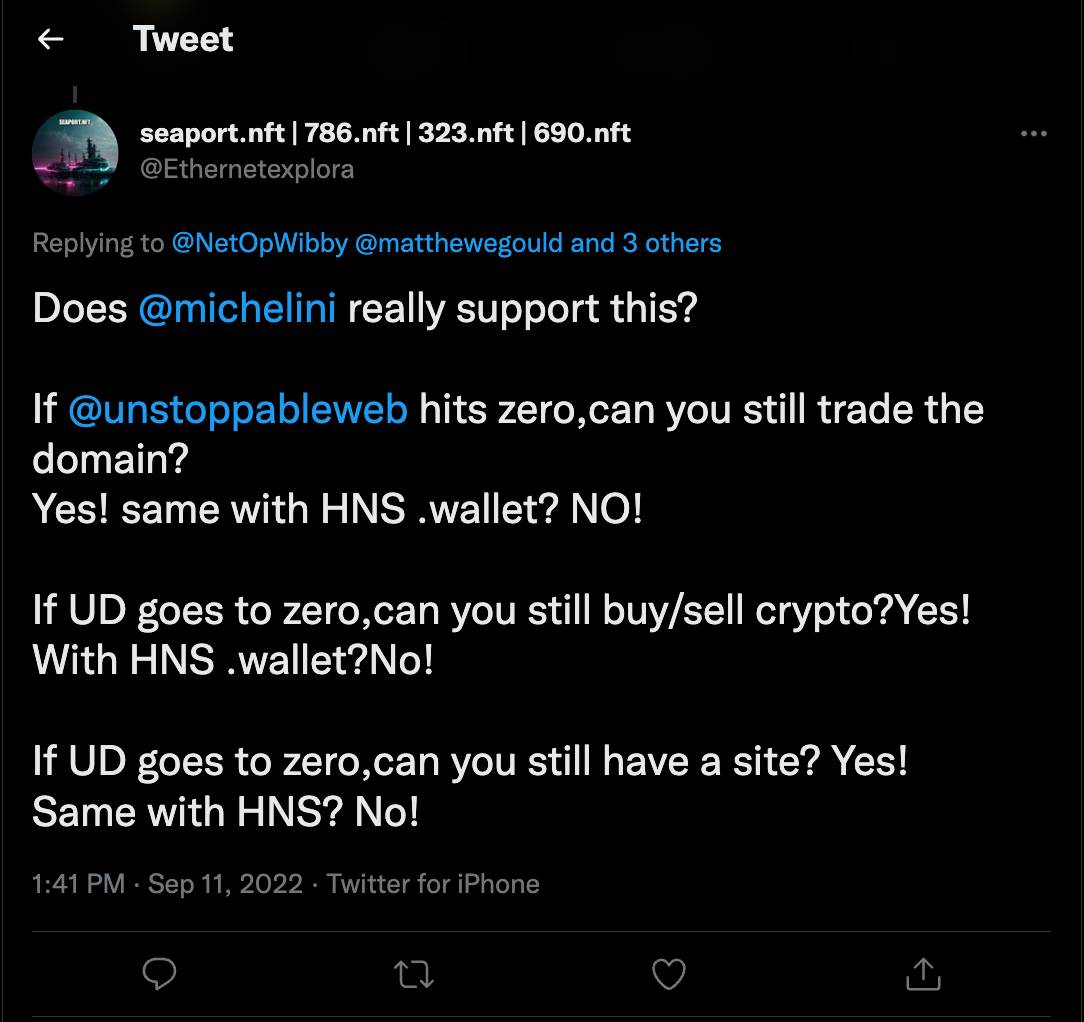 Some feel it is not possible - and not going to lie it would not be easy - but there are many OG crypto people here from the early Bitcoin days that will stand on this rock. Many have built businesses on Handshake and will mine and run nodes to keep the network going. That is another reason I have been bullish and comfortable being part of this community. We are also mining, and we also have nodes running here in our SkyInclude team.

Feeling More Confident and Comfortable in Handshake Than Ever

Look at what has happened in this decentralized , grassroots effort. NamesCon representation was amazing - so many individual companies chipping in for sponsorship. Amazing panels, and public debates with Unstoppable that shows so many holes in UD’s long term plans.

But my favorite is - Handshake is not 1 company. There are a growing amount of businesses coming from this and we are seeing them come to life - and earn an income - and thrive.

Time for us all to band together even more - and come out 100x stronger.

I for one - have never been so bullish on Handshake. Putting my time and my efforts where my “mouth is” now that I am finally settled from a massive family migration between countries, expect more updates here on SkyInclude.

You might also wanna check The .wallet story on Handshake to know how it all started.