The .wallet story on Handshake

Domain Name Wire .com has been a great source for the latest updates on the .wallet battle on Handshake vs Unstoppable. We at SkyInclude wanted to wait to have more updates before making this latest video update - but think it is a good time to update everyone.

Some of his articles link here:

There was a consultation call late last week with Scott the .wallet/ owner on Handshake, James the owner of Gateway, and a lawyer recommended by Tom at Encirca. Seems the lawsuit brought by Unstoppable is, stoppable, but it will cost money to defend.

Scott wrote this letter to the community in pdf form, the screenshot below: 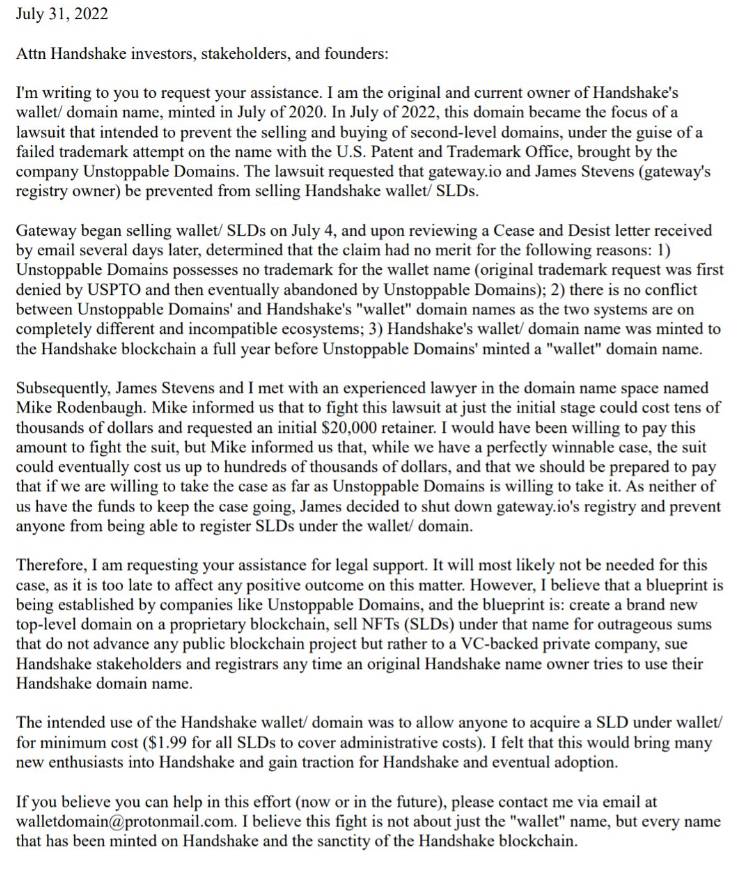 And Gateway decided to cease sales of new Handshake domains due to non payment (believe this is unrelated to the lawsuit, but maybe all of this was “the straw the broke the camel’s back” as the saying goes)
https://twitter.com/NamesOfLondon/status/1553744007423004678 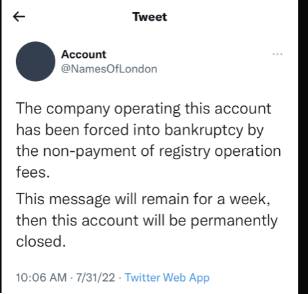 The lawyers are who wins. To defend a case, which is baseless, will costs hundreds of thousands of dollars in legal fees?

We know many of you are wondering about your Gateway domain names, both .wallet as well as any other domain in the account. We also many premium ones in there that we at Skyinclude care about very much. We did have an affiliate link but never received payment on that either.

Lost The Battle But Who Will Win The War?

Not going to lie, this is not a fun day for the Handshake community. We are scrappy bootstrappers and that is what attracted me to the community in the first place.

Yet we do feel kicked, and even kicked when we were already somewhat down.

There are many decentralized domain solutions coming up now. And we believe long term HNS is the superior solution to run the internet.

How can anyone want a privately funded company to run the future of the internet? I mean who supports that, really?

The .wallet Legal Road Ahead? Saga on Handshake and Unstoppable Domains

So it’s been a few days now since .wallet debuted on July fourth - and a lot has happened. A lot of Unstoppable Domains customers are upset as their domain names they invested in are now going to have this clear overlap. 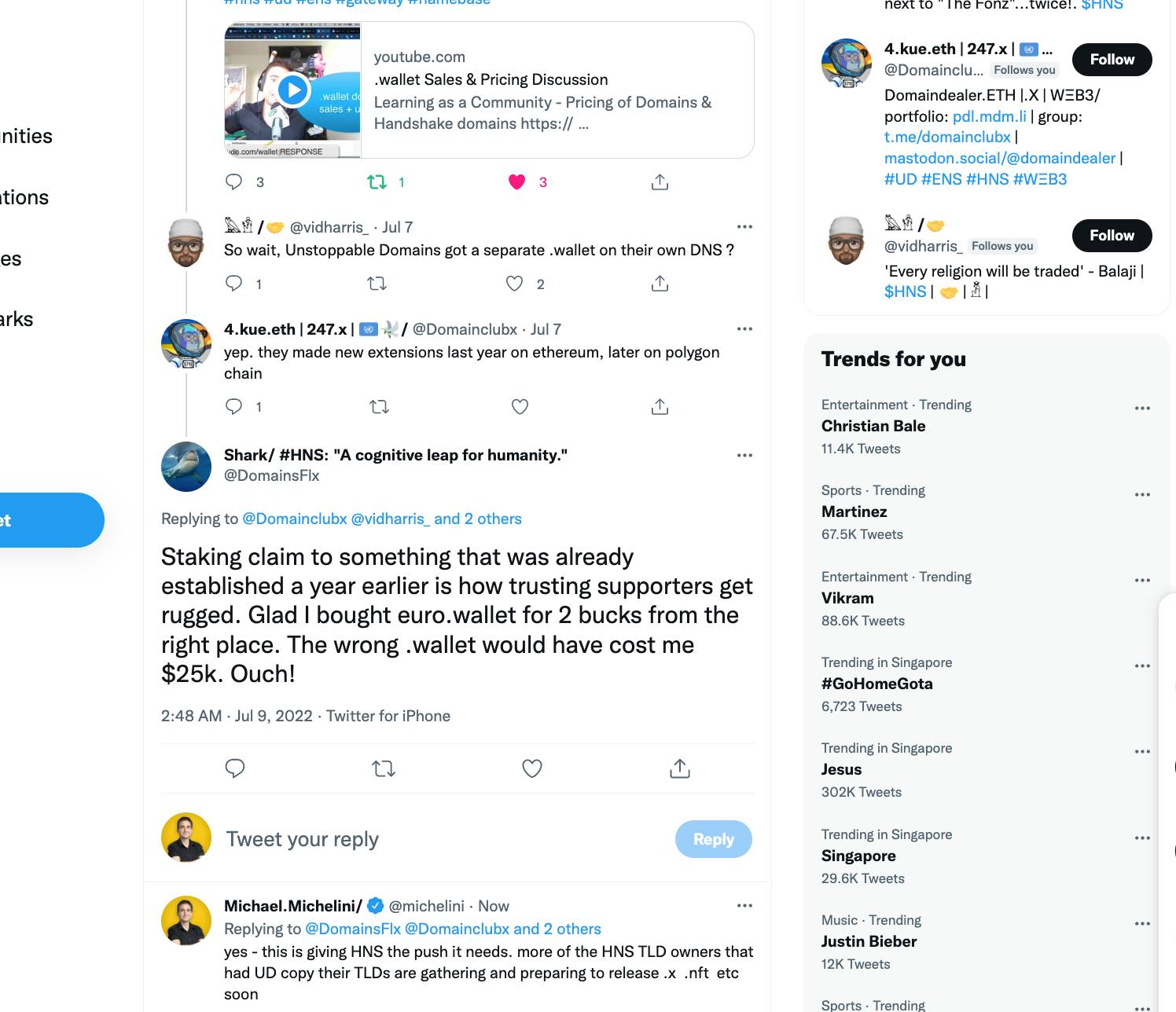 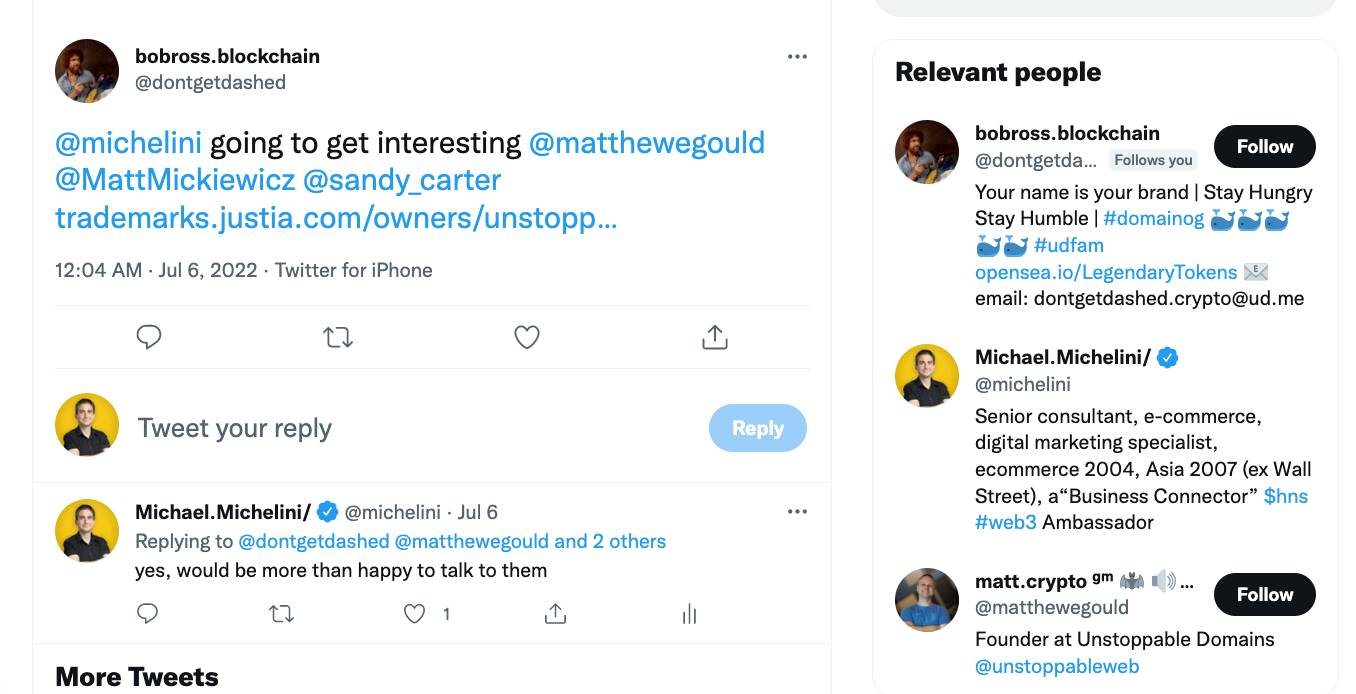 But I have read that their trademark case did not go through successfully: 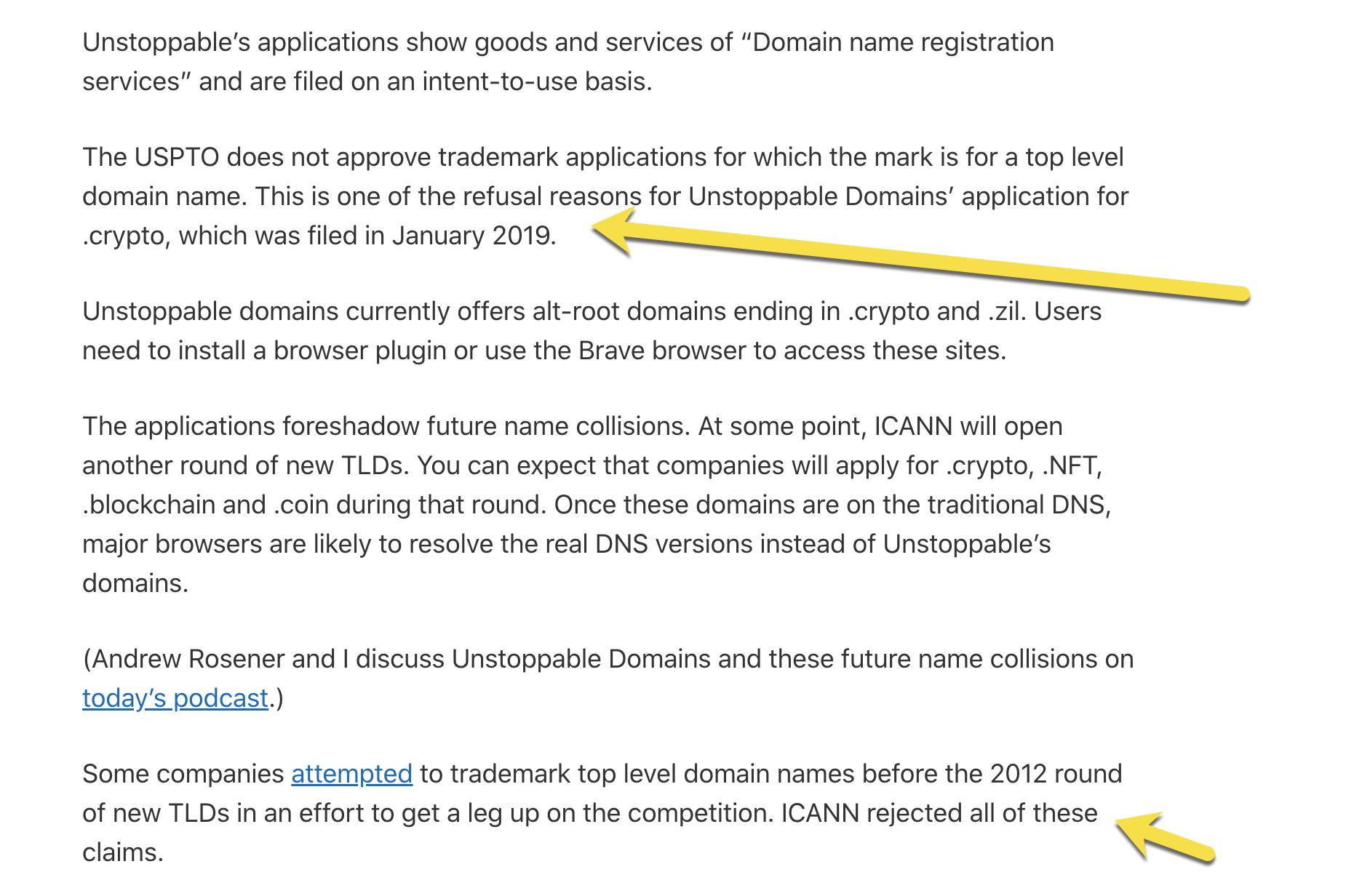 To me it is “State” (government) vs “Network” (blockchain) and will get very interesting, read “Network State” book that just came out:

Following the HNS Fund discord - The Gateway registry had a call with Unstoppable Domains CEO and the UD company is asking him to stop sales of the .wallet domain. Seems that is not going to happen.

Maybe the opposite will happen - other HNS TLD owners of other overlapping TLDS of UD may start to release their TLD for domain registrations. Moree people in the decentralized Handshake community will pile on to market and promote these names, myself included.

To us, it is not about the money, it is the principle.

It is the centralized authority of a USA VC funded company trying to be the ICANN of web3 versus a blockchain based network of TLDs that are owned by the people.

What if UD starts to issue more TLDs out of thin air that conflicts with TLDs that I have invested in and built?

HNS .wallet was out year+ before UD’s - and I am 99.9% sure the UD executives knew about this. I am so sure because they are now reaching out to various people in the Handshake / domain industry. Many in the domain industry were involved in Handshake early on and I believe these conversations with UD happened behind the scenes quite a bit.

For comparison - here is UD compared to HNS (a bit dated, but still helpful for key points) 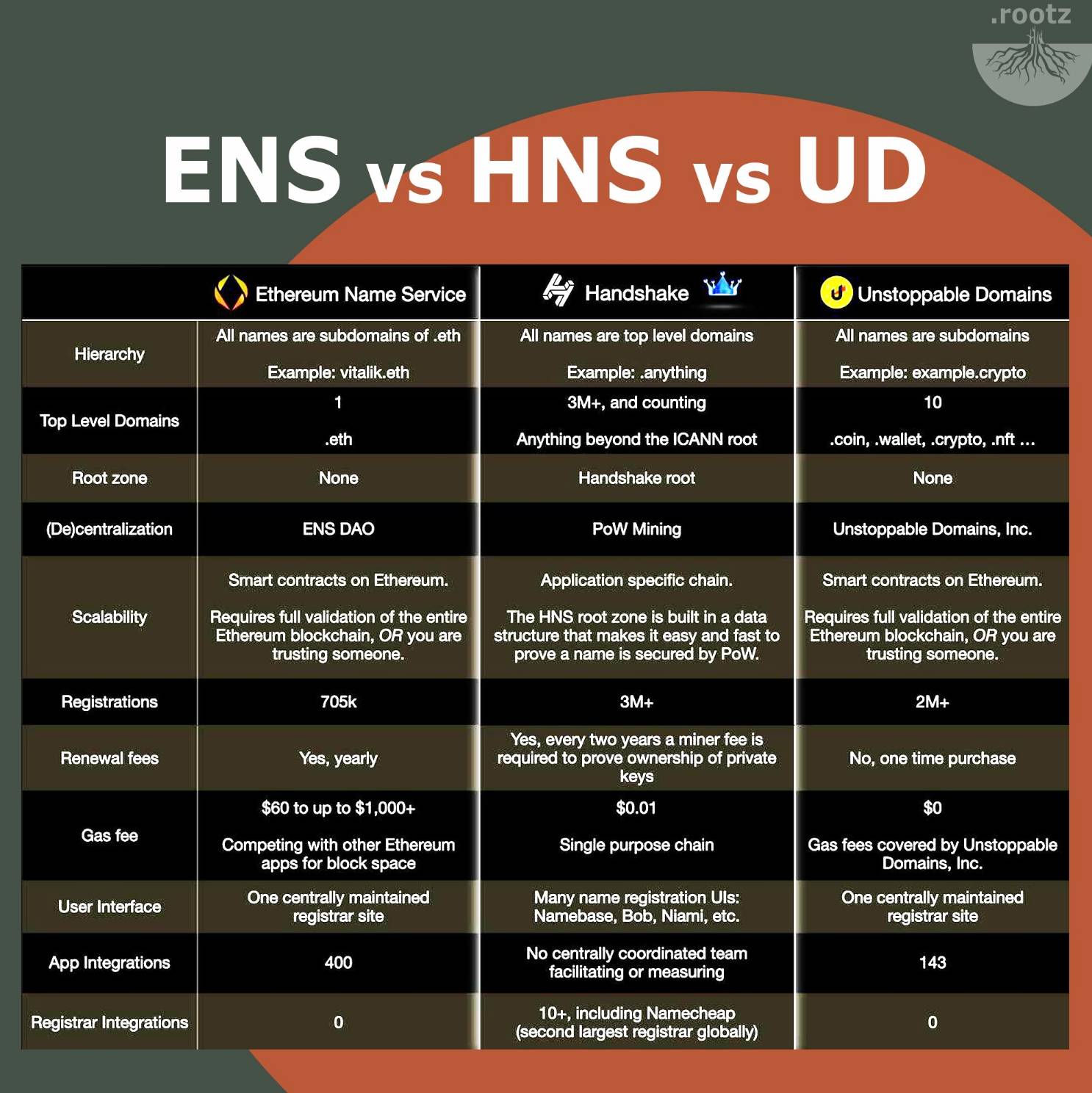 UD to Sue The Blockchain? It will Not Be taken Down

So if UD sues any entity in HNS community (again, HNS is a decentralized blockchain, they need to sue a registry, registrar, TLD owner, someone specifically) - what can happen anyway?

It is a web2 case (UD’s trademarks) versus a web 3 / crypto network case.

And if UD wins, it will be a sad, sad day. It will mean they are the new ICANN of web3. And we all need to follow the UNS (I saw this mentioned in one of the Unstoppable Discord messages) - so we all need to bow down and serve a centralized company’s decision of what TLDs, etc.

Even if it wins - there is the internet. There is decentralized web.

I’ll argue this one as much as I can. As a director of Handshake. As a decentralized community vs a centralized VC funded Silcon Valley company who thinks they can do whatever they want on web3.

More are preparing to release.

Handshake’s .x was sold in an online event in late 2021 as well, which was already on the blockchain well before Unstoppable Domains issues their baseless .x.

What if UD issues .s too? Or others on their “thin air” rootless system?
Namecheap bought .s for 750,000 USD from our Flamingo Handshake auctions in March 2022
https://domainnamewire.com/2022/03/18/a-handshake-domain-apparently-just-sold-for-750k/

Why did they wait to start selling SLD domain names?

Many of these TLD owners were waiting for a better dSLD issuing solution. We can talk to them on this very Skyinclude Youtube, and maybe we will. We know all the owners.

Happy July 4th holiday for all those Americans celebrating. Here at SkyInclude, we are presenting you an amazing opportunity from the handshake TLD owner of .wallet!

He is OPENING UP the flood gates and allowing anyone to register ANY domain on his .wallet domain extension for only $1 USD to register and $1 USD yearly renewal.

On top of this - we got an exclusive interview with Scott, the owner of .wallet to share his story and introduce this amazing opportunity.

One day later and the .wallet sales are averaging about 1 registration per minute!!

But also want to clarify on the price difference: 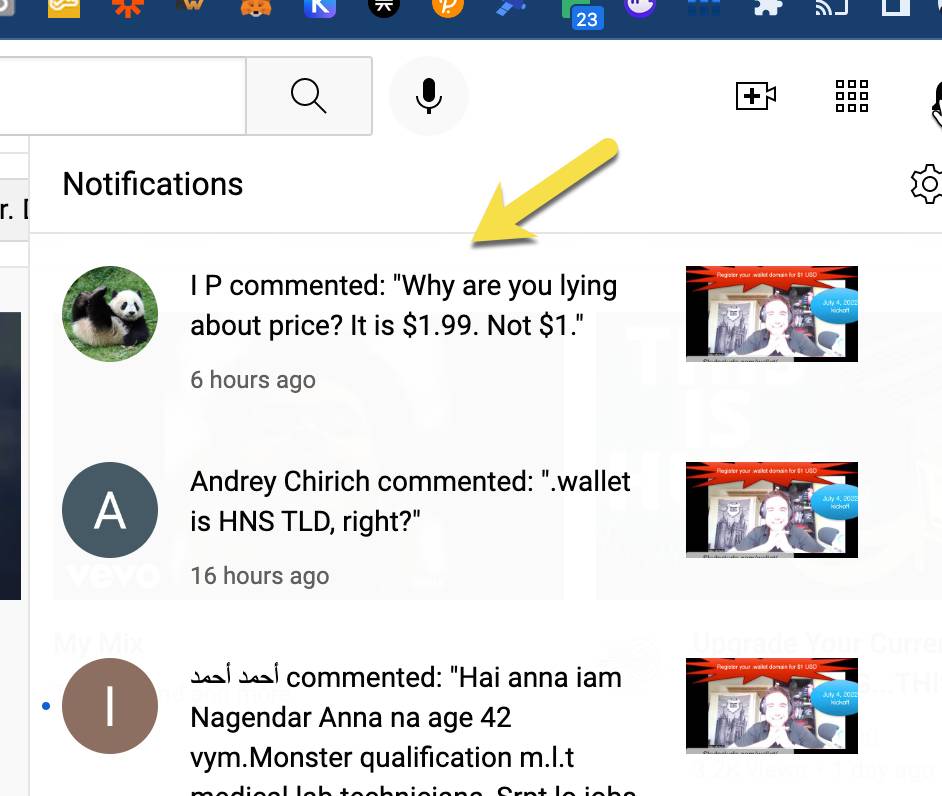 So Youtube doesn’t allow us to replace a video - and we said $1 USD in the interview with Scott, the TLD owner of .wallet - but as many commented - it came out for $1.99 USD. Of course it was not my intention to deceive, and this is the price I was told it was going to be sold at.

But let’s take this as a lesson for all of us to learn how domains are priced.

Gateway is both a registry and a registrar, so the $1 USD is the “wholesale” or the “registry” price, and then the registrar (Encirca, Porkbun, Namecheap, Godaddy, even us at SkyInclude) can then sell those domains to our domain registrants (customers) at a mark up price.

While I still don’t feel “warm and fuzzy” with how things went down - hopefully people are not too bothered paying an extra 99 cents, and life can move on.

Here is an official notice from Gateway.io:

Dot-WALLET names will be available to end-users for $1
They just aren't yet because we're still in the process of on-boarding the larger registrars.
Gateway Registrar (gateway.io) is a small business, this gives us the advantage of
flexibility, but it also means we have higher costs (credit card fees etc) so have no choice,
but to pass on some of that cost in our prices.
Larger registrars like Porkbun will have economies of scale that we don't have, so will have
more flexibility on pricing, but this also means they can take longer to on-board new
TLDs.
Scott was extremely keen to bring WALLET to the community as soon as possible, so we
made the decision to launch as soon as possible, even though this meant we had not yet
been able to meet our target price.
We are also extremely keen to get NameCheap to take WALLET onboard and are actively
working to achieve this. The economies of scale they enjoy, we can only dream of, so we
are confident we can jointly come to a suitable deal to enable them to sell WALLET for $1.
However, we made the decision that we did not want to delay the launch of WALLET
pending these negotiations.
Anything the community can do to encourage Porkbun and/or NameCheap to onboard
WALLET would be hugely appreciated – try twitter → @porkbun & @namecheapceo

About the Unstoppable .wallet Collision 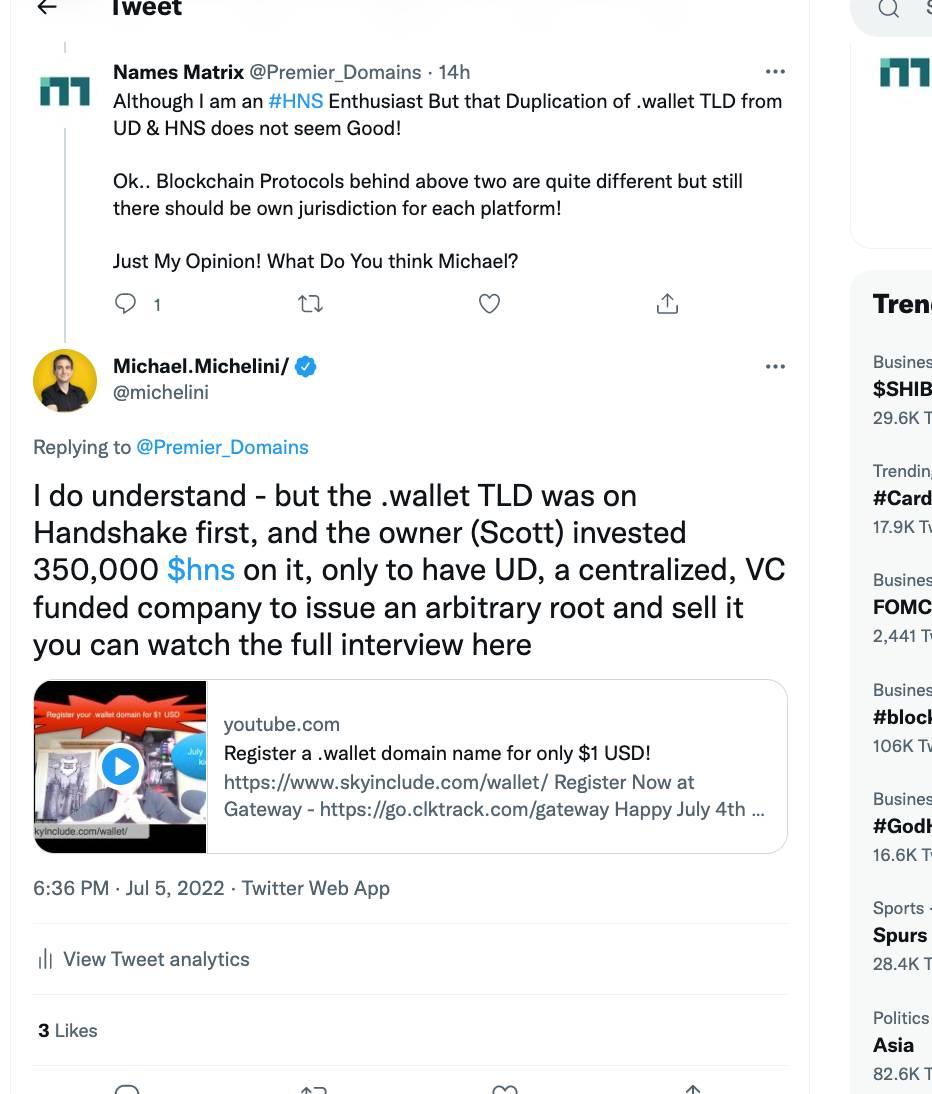 Although I am an #HNS Enthusiast But that Duplication of .wallet TLD from UD & HNS does not seem Good!

Ok.. Blockchain Protocols behind above two are quite different but still there should be own jurisdiction for each platform!

Just My Opinion! What Do You think Michael? 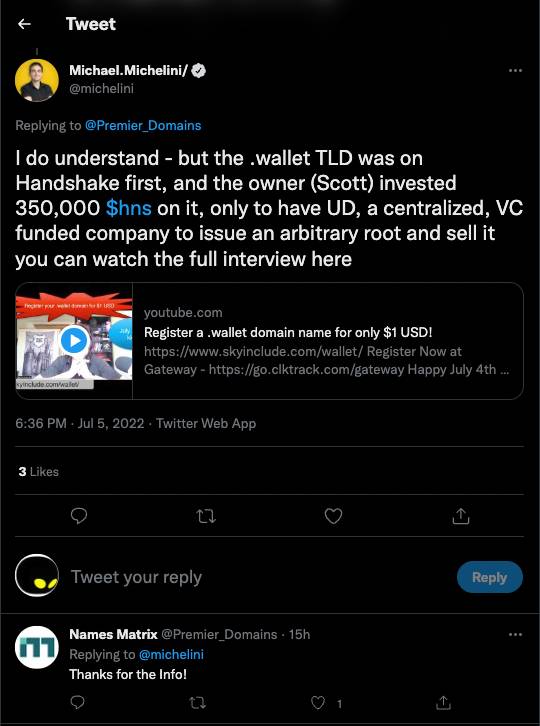 the .wallet TLD was on Handshake first, and the owner (Scott) invested 350,000 $hns on it, only to have UD, a centralized, VC funded company to issue an arbitrary root and sell it you can watch the full interview here at skyInclude.com/wallet.

Happy Fourth Of July - .wallet Opens Up Domain Sales for Only $1 USD

For the Americans here, we hope you are having a great Independence Day!

Over this holiday weekend, we connected with the owner of .wallet on Handshake - and he is doing something quite unique.

He is releasing sales for .wallet domains on Gateway.

And sure, that is normal - many Handshakers are starting SLD (domain) sales.

But he is doing it for just $1 USD registration and $1 dollar to renew.

Taking no profit for himself. All going to the registrar.

So we at SkyInclude thought that was a unique story and have Scott (the owner of .wallet) on the site to interview him and hear his story.

Have a great rest of your day, and grab your .wallet