As we see more and more Ethereum based domain NFT solutions here at SkyInclude, we want to highlight the fact there is a few Handshake startup companies also building on Ethereum, right now being Impervious.

And further expanding on the “customers of blockchains” video and blog (https://skyinclude.com/blockchain-customer), we see Decentraweb also as a customer of Ethereum, similar to how Unstoppable and Impervious are customers of Ethereum. 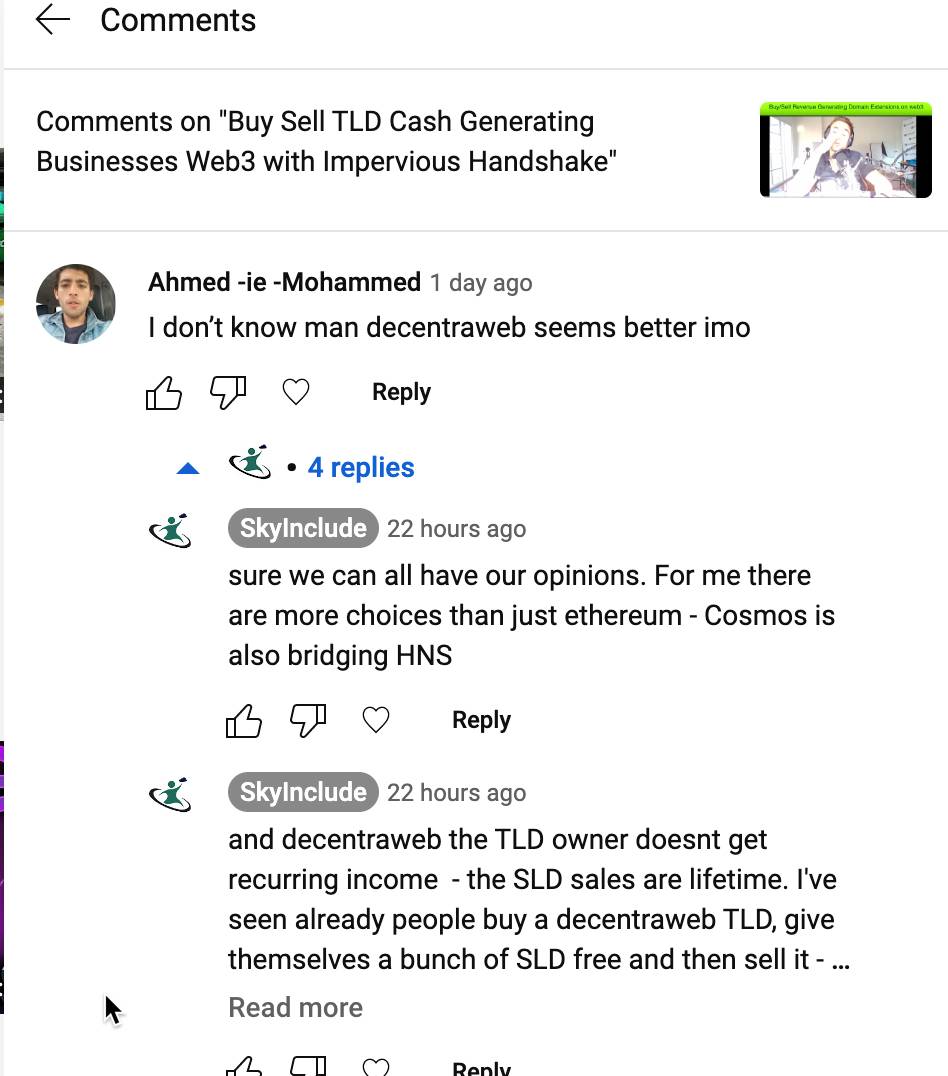 Decentraweb is “Doing It All”, where Impervious is Allowing HNS TLD owners to Stake and sell

Decentraweb undoubtedly is easier to understand and use. I’ve been answering questions from people about how to stake Impervious that have never heard of Handshake - and for sure it is quite a lot of steps. First they need to figure out and buy HNS and get an HNS TLD on Namebase, Bob Wallet, CLI, etc - and then they need to bridge that to Ethereum.

Decentraweb is an all inclusive dApp on Ethereum. Their team raised funds, issued an Ethereum based token, and made a decentralized application to allow their customers to buy a TLD and stake it - all within their team operated single interface.

So ya - it is a lot easier and all in one. But we will talk about some of the setbacks of having 1 team in charge of building everything later on.

From my research and from what I have been shown in the Telegram group of Decentraweb, when you mint a SLD (left of the dot, a normal domain) - it is a 1 time fee for life. Similar to Unstoppable Domains or Forever domains.

Decentraweb you need to pay for the TLD every year in ETH or dweb token.

For Impervious, the SLDs are yearly (maybe they will offer lifetime in an update? But for now no option). And on the HNS TLD - it is most likely sent to a burn address where anyone can renew, and as we know the HNS TLD renews every 2 years with a heartbeat transaction on the HNS blockchain (1 mining fee) so is pretty much negligible.

As this person in the Youtube comments asked - then why would a TLD owner on Decentraweb renew their TLD if all the SLDs have been sold for a lifetime? 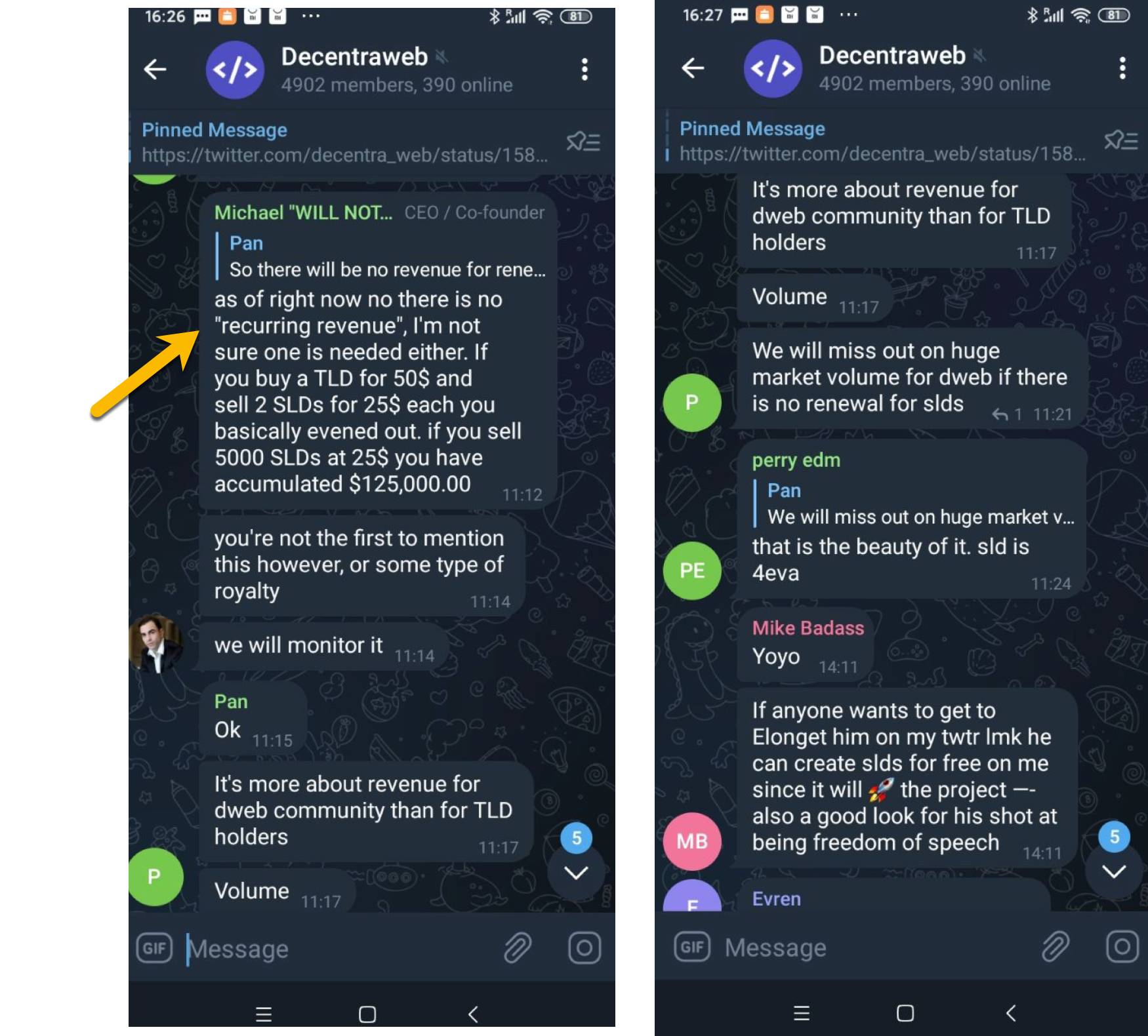 We at SkyInclude ask ourselves the exact same question. We have heard people in our circle that there is requests from the customers of Decentraweb that the team turn on royalties for SLD sales so that the TLD owner of those SLDs get those royalties - but that has to be approved by the Decentraweb team and has to be developed into the smart contract.

It will be interesting to see as more SLDs are minted for lifetime - and then the TLDs are not renewed as no future income, what will happen? Will the SLDs stay active and working if there is no owner of the TLD?

For Decentraweb, they have an ethereum based token Dweb for their dao and tokenomics. So when customers buy SLDs and buy/renew TLDs, the proceeds are divided up by the token holders.

For Impervious, the TLD owner pays a minting fee to stake the TLD on Impervious (ethereum), and then a 20% commission on SLD (domain) sales goes to Impevious, while the TLD owner keeps the 80%. As we have seen Impervious add new features (such as royalties) they are also sticking to their 20% commission fee. I’ve mentioned this in other videos, but the idea is Impervious is a platform to allow Handshake TLD owners to bridge to Ethereum without each needing to make their own bridge and smart contracts (using Handshake’s HIP005).

This is the “race” for integrations. To get the browsers, to get the wallets and the platforms all to know the wallet addresses of the domains. As of writing this in November 2022, both of these projects have not done much integrations, so it is about level playing field.

Decentaweb came out well after HNS main net and basically collided every single TLD in existence as a clone of HNS - using a similar reserve name system (not fully sure what the reserve name list is though for Decentraweb).

So that means for integrations - it is truly a race and competition between these 2 groups:

Decentraweb the dApp on top of Ethereum
Vs
Handshake the layer 1 protocol - where dApps such as Impervious build.

I think you know which I prefer. But I also feel once mass adoption comes, and there is a distributed network of companies and startups and devs making all kinds of apps on Handshake domains across all blockchains - I’d see the HNS blockchain gaining more mass adoption than an Ethereum only solution.

Impervious is 1 Company / Dapp in an Ecosystem of Handshake Protocol Builders , Decentraweb is a single Dapp team working

If you read the Telegram groups of Hns and Decentraweb - it is a clear difference. There is a team in Decentraweb and there is a bunch of admins (I’m an admin on the HNS telegram) who say there is no central leader and it is permission less and you can build anything on you want.

Once in a while (actually pretty often) we get Namebase support requests in the HNS telegram - and we tell them to go to the Namebase discord for that. Namebase is another “app” on HNS, for example. Where Impervious is a dApp on Handshake for Ethereum.

We also are hearing of so many amazing things being built on Handshake - that do not want us to publicly announce just yet. But there is open twitter chats for example of angry Mouse (from Another.software) who is making a bridge to Cosmos blockchain of HNS TLDs vs the Stars NFT chain in that ecosystem.

We’ve talked with Derrick from LumeWeb on his browser and all the amazing things and alternative blockchains he is building on.

This is all just exponential growth that is hard for any of us to fathom.

But for me, personally,